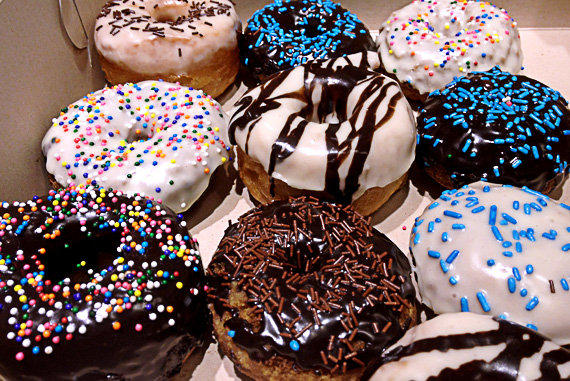 What better way to spend a Saturday afternoon, than making doughnuts? Well, you could have famous blogger and cookbook author Joy Wilson, of Joy The Baker, as your instructor!  SQUEEE!!  It was a Joy-ful Saturday, that’s for sure! 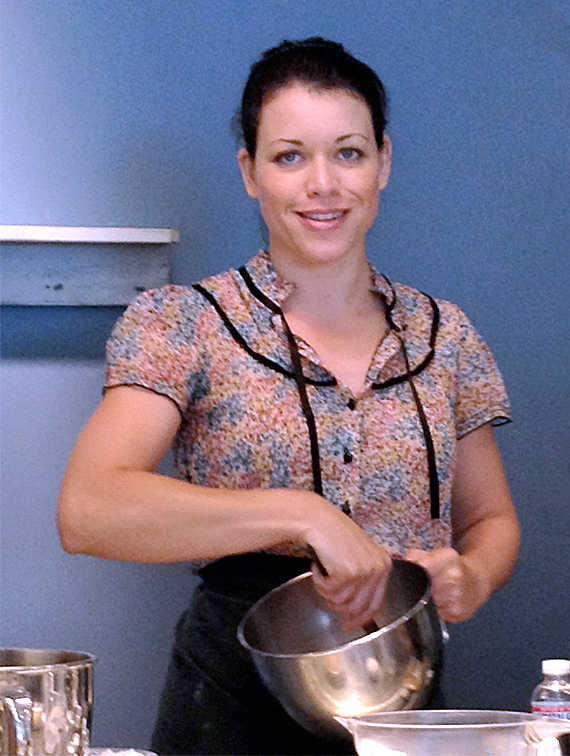 You could also be pairing the doughnuts with five different sparkling wines! Hey… what’s a little alcohol among friends? Joy’s friend Whitney (who is a Sommelier!) gave us “Sparkling Wine 101” between batches of doughnut dough and frying! 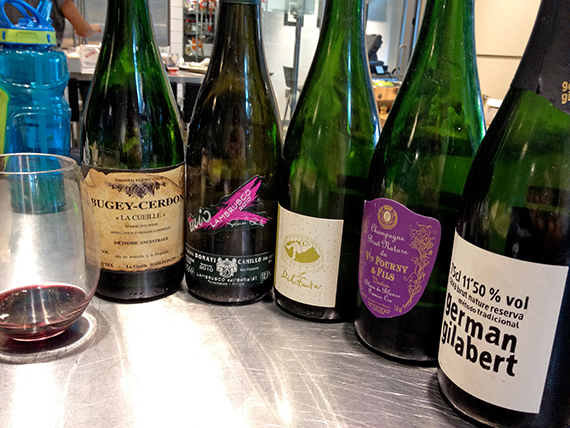 While we were sipping the first wine, we made dough for a Yeast Raised Doughnut. Joy shared a great tip for measuring flour! She puts her flour in a large bowl and stirs it well, before measuring. She never uses a measuring cup to dig out flour. She gently scoops flour into her measuring cup with a spoon, then levels it off. This way the flour doesn’t get compacted down in the measuring cup and throw off your recipe. Baking is a science after all! Knowing this, we put together our first dough… 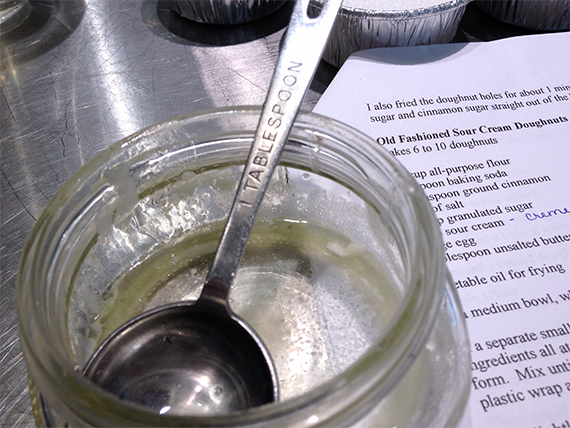 We let it rise in a 200 degree oven, then rolled and cut them into doughnut shapes! We used a biscuit cutter and then the large end of a large piping tip to make the holes in the middle. What a fabulous idea if you don’t have a doughnut cutter! 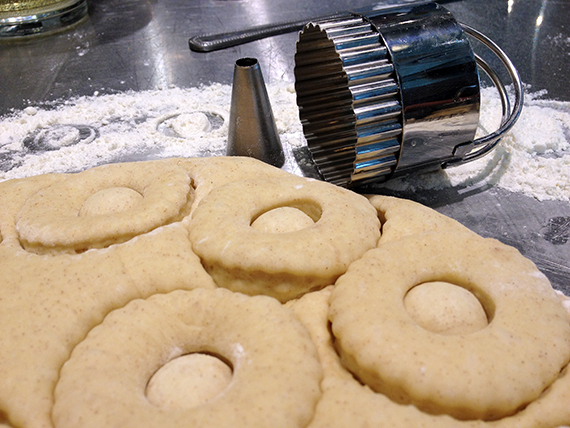 We let these doughnuts rise again so they will be light and fluffy! 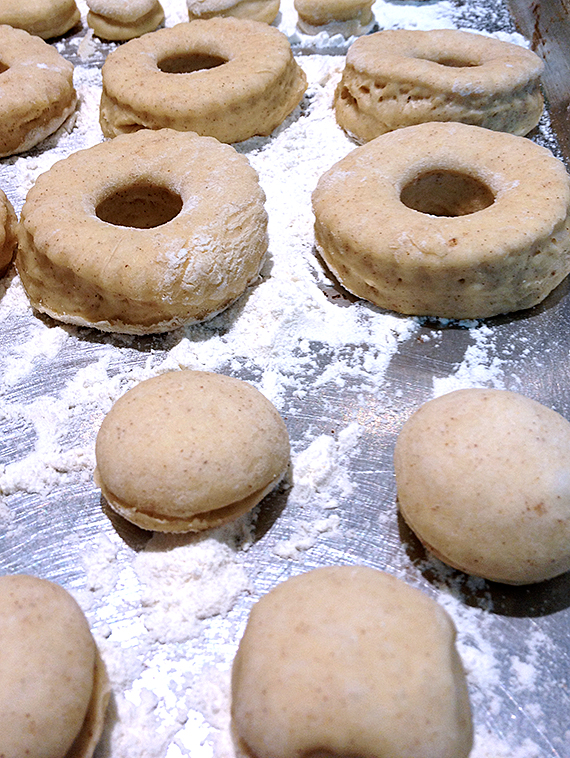 After more wine and more great info from Whitney, we made Old Fashioned Sour Cream Doughnuts! These don’t need a mixer and they don’t need to rise! The dough does need to be refrigerated for about 20-30 minutes, but when it was ready, we rolled and cut them just like the yeast doughnuts! 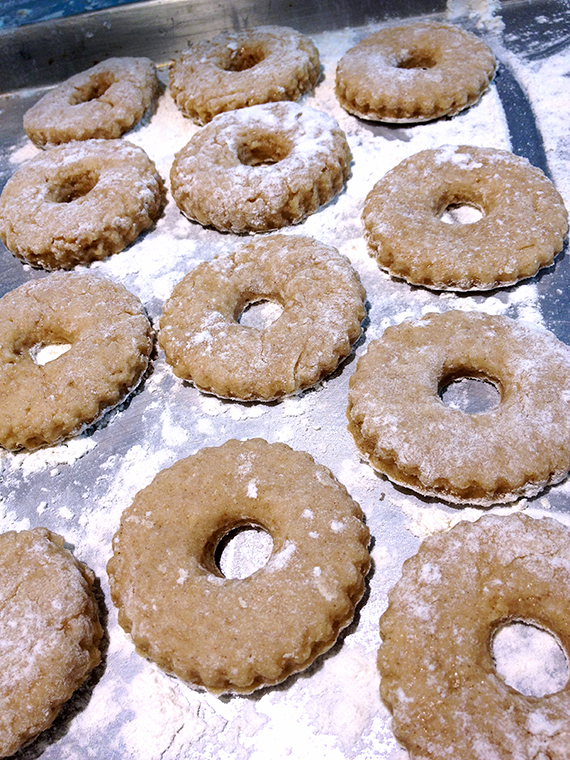 You know what this means, right? More wine and then it was time to get frying! 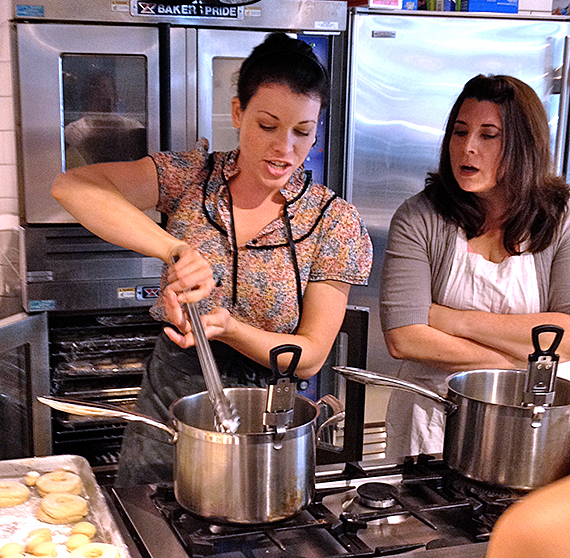 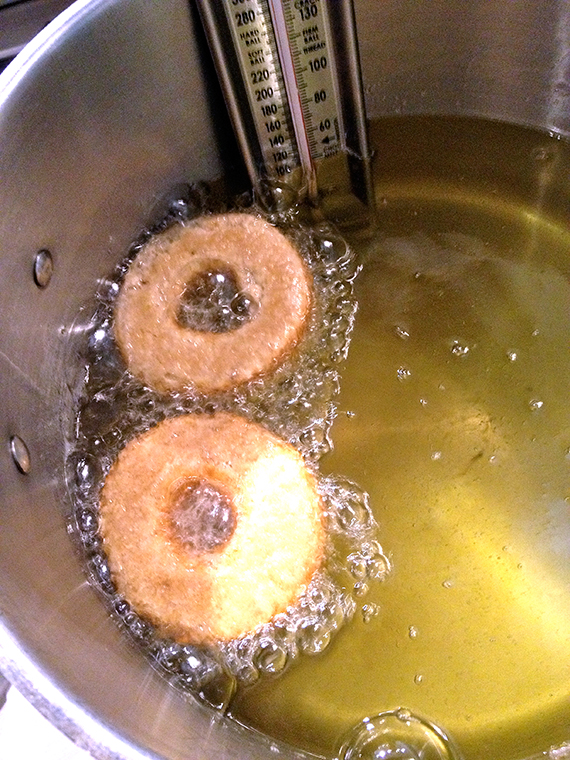 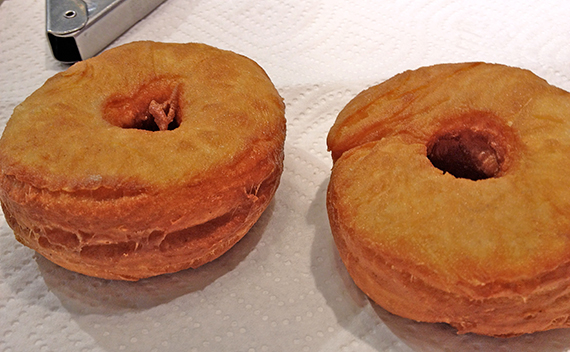 When the doughnuts had sat for a few moments on the paper towels to drain, we dipped them into glaze and put sprinkles on them! 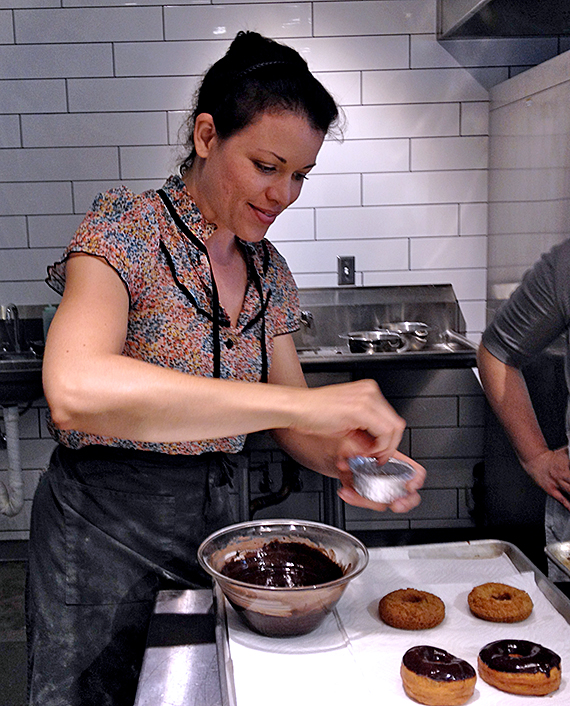 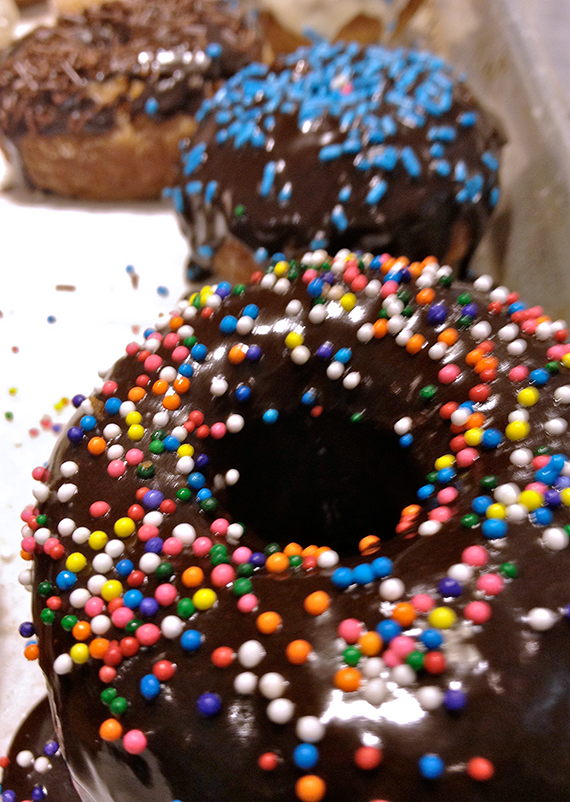 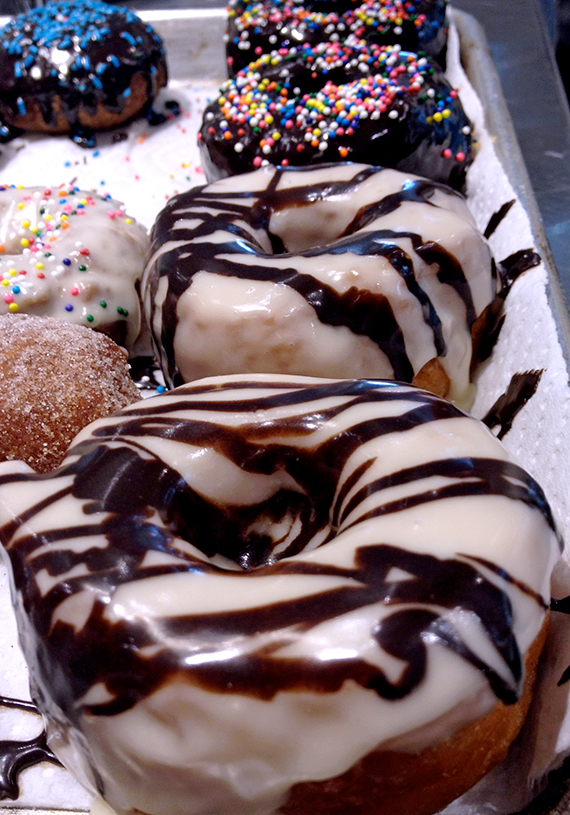 Some we rolled in Cinnamon Sugar! This was my favorite way to do the Doughnut holes. :-) 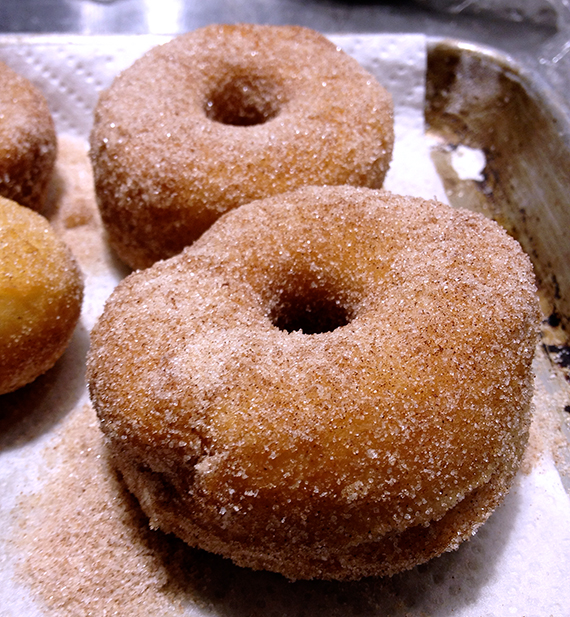 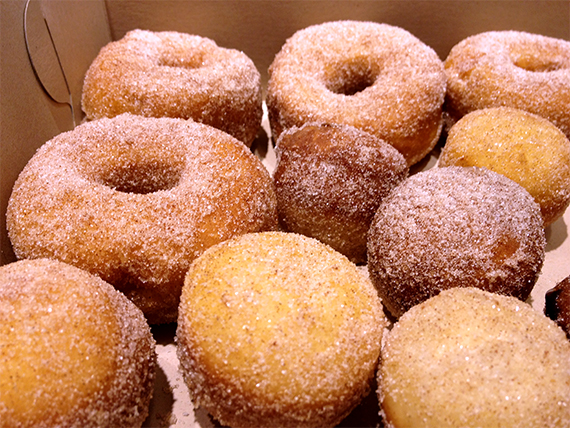 They were delicious! I’ve already made the Sour Cream Doughnuts for my family and the next weekend I have off, we’re making the Yeast Doughnuts!

Joy is so sweet! She lives close enough to school that she rode her bike to class! How awesome is that? She was kind enough to sign my copy of her cookbook… 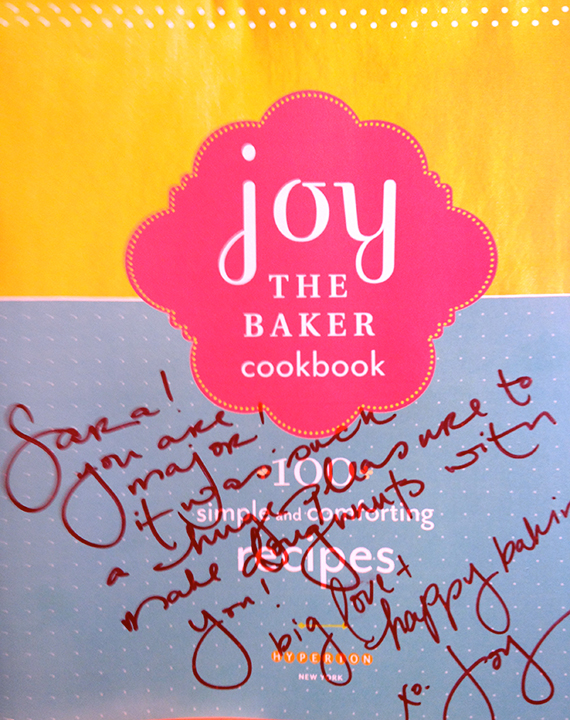 and pose for a picture… 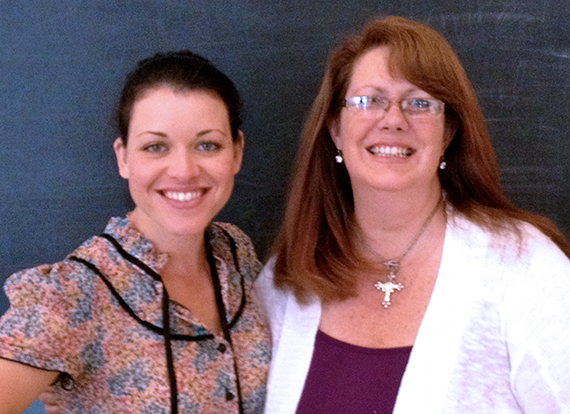 Now all this is great and wonderful (It was for me!!) but I bet you want recipes too. Ok, foodie friends, here they are and they are fantastic!

Place warm water in a small bowl. Sprinkle yeast and pinch of sugar over water. Stir gently. Let stand until foamy, about 5 minutes. (If yeast doesn’t foam, discard and start over with new yeast.)

In the bowl of an electric stand mixer fitted with a dough hook, combine flour, milk, butter, yolks, sugar, salt, cinnamon and yeast mixture. Beat at low-speed until a soft dough forms. Increase speed to medium and beat 3 minutes more. Add about 2 to 3 TBLS more flour should the mixture be too moist. The dough will appear to be soft and wet.

Scrape dough down sides of bowl into center, then sprinkle lightly with flour (to keep a crust from forming). Transfer dough into a lightly greased bowl. Top with a bit more flour. Cover bowl with plastic wrap and a clean kitchen towel and let dough rise in a draft-free place at warm room temperature until doubled in size, 1 1/2 to 2 hours. (Alternatively, let the dough rise in bowl in refrigerator 8 to 12 hours.)

Turn dough out onto a lightly floured surface and roll out with a lightly floured rolling-pin into a 12-inch round (1/2 inch thick). Cut out as many rounds as possible with a 3-inch cutter, then cut a hole in the center of each round with a 1-inch cutter and transfer doughnuts to a lightly floured large baking sheet. Cover doughnuts with a clean kitchen towel and let rise in a draft-free place at warm room temperature until slightly puffed, about 30 minutes (45 minutes if dough was cold when cutting out doughnuts). You can re-roll the scrapes once, though those doughnuts will be a bit less tender.

Heat 2 1/2 inches oil in a deep 4-quart heavy pot until it registers 350 degrees F on a thermometer. Fry doughnuts, 2 at a time, turning occasionally with a wire or mesh skimmer or a slotted spoon, until puffed and golden brown, about 1 minute per side. Transfer to paper towels to drain. (Return oil to 350 degrees F between batches)

For doughnut holes, fry for about a minute total, turning gently in the oil as they are more difficult to flip over than a doughnut. Toss them in powdered sugar or cinnamon sugar straight out of the hot grease!

In a medium bowl, whisk together flour, baking soda, cinnamon and salt. Set aside.

In a separate small bowl, whisk together sugar, sour cream, egg and butter. Add the wet ingredients all at once to the flour mixture. Stir to combine. The dough will begin to form. Mix until the flour disappears and a shaggy ball forms. Place dough in a piece of plastic wrap and refrigerate for 20 minutes.

On a lightly floured work surface, roll dough into a 1/2 inch thickness. Cut out doughnuts using a 2 1/2 inch round cutter. Cut out holes in the center of your rounds using the large end of a large piping tip or a 3/4 inch round cutter. You can gently re-roll any dough scraps.

Heat at least 2 inches of oil in a heavy bottomed pan until deep-fat thermometer registers 350 degrees F. With a metal spatula, gently place doughnuts in the oil. Fry for about 40 seconds on each side, or until light golden brown. Remove with a slotted spoon and drain on paper towels.

Let cool just slightly before glazing. Doughnuts are best served the day they are made!

In a medium bowl, sift together the sugar and cocoa powder. Slowly stir in the milk and vanilla. Add a little bit at a time and whisk until smooth and pourable.

Dip slightly cooled doughnuts in glaze and allow to rest for 20 minutes to set the glaze.

Place sugar in a medium bowl. Slowly stir in maple syrup and milk a little at a time, creating a smooth and pourable glaze.

Dip slightly cooled doughnuts in glaze and allow to rest for 20 minutes to set the glaze.