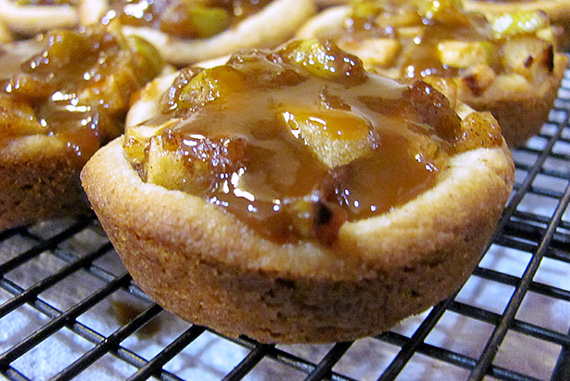 Snacks for this week were both a success and a failure. I know, I know, who wants to read a food blog about food failures?  Well, this is an Imperfect Kitchen. If everything came out perfectly the very first time, I’d be famous.  We are learning together. The success was I learned to make tartlet shells out of cookie dough. Very exciting!  The filling possibilities are endless and I can’t wait to experiment!  The failure?

The cookies didn’t come out very well. I burned the caramel for the filling (scandalous!).  It’s amazing how things can go from fine to terrible in a matter of seconds.  Lesson learned!  I’m also not sure they should be called “cookies”… they were tartlets. The teenager said they were great. Keep in mind, he’s 17 and will eat just about anything!  While I love him, his opinion is biased.  I wasn’t happy with the overall taste of the first batch, much of that was because of the caramel. The second batch, appropriately named “I’m really tired! I just want to finish these and go to sleep.  How can I make them faster?” came out better!

This is the original batch and the fun tartlet technique!  First, lots of frozen butter! 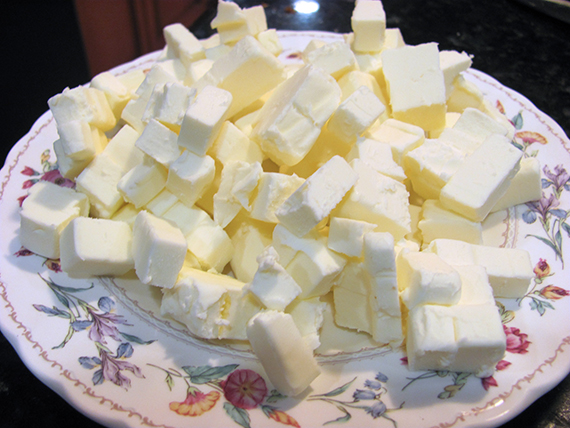 Add in some flour, cinnamon, brown sugar, milk and vanilla and you have a great cookie base.  Combine everything in a food processor and pulse until it forms a ball. On a lightly floured surface roll the dough into a log and cut it in half.  Put one half in the refrigerator so it stays cool. Cut the other half into twelve even pieces. Roll each piece into a ball. Place each ball into the cup of a muffin pan. 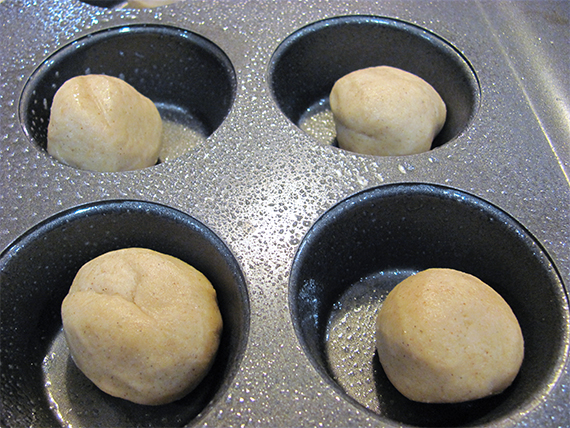 Press down on the dough until it forms a little cup. The original recipe said to use a “dough tamper” and a mini muffin tin. I don’t have either of those. I used a regular muffin pan and the bottom of a shot glass to create the cups. 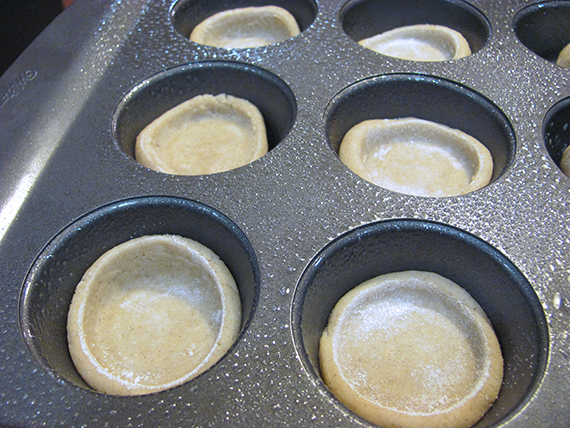 Cute, right? Are you envisioning the millions of ways you could fill these? If you use a mini-muffin tin, the cups will come all the way up the sides. As you can see, mine didn’t come all the way to the top.

Fill the cups with the apple filling. About a teaspoon and a half of filling worked well on these. It’s the same basic recipe as the filling for the apple crepes a few weeks ago. Diced apples, brown sugar, lots of seasoning and butter. Cook the apples until they are soft. Allow to cool, then fill. 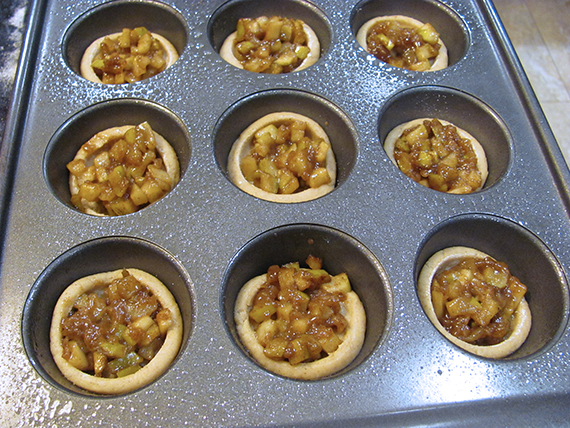 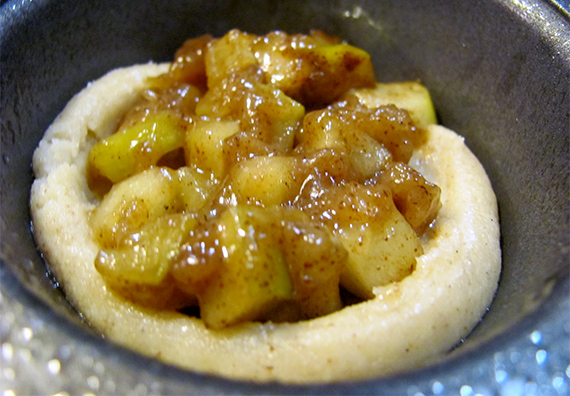 Now bake at 350 for 15-20 minutes or until they are golden and bubbly! While they are baking, make the caramel sauce. Here is where my downfall happened! The sugar was happily boiling away, just starting to change color. I turned away to quickly clean off my counter and when I turned back, the caramel was smoking a little. I pulled it off the heat to let it cool before adding the butter etc. The color wasn’t bad and it didn’t smell burned so I thought it was ok. I finished the caramel sauce, pulled the tarts from the oven and then proceeded to fill the tarts with the sauce. Mistake number two, I didn’t taste the caramel before filling the tarts. If I had, disaster could have been avoided. Caramel has a very bitter taste when it’s burned. 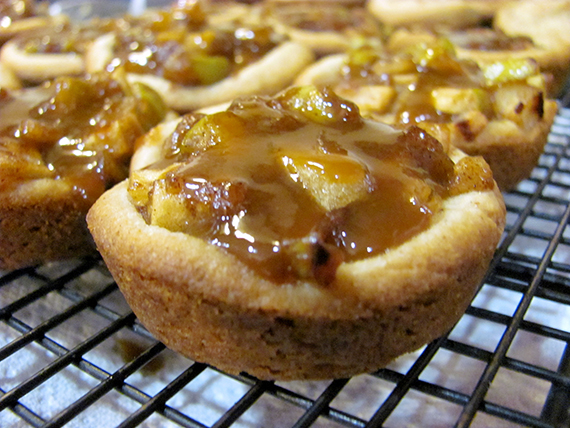 At least, they look gorgeous! I wish they tasted that way too. By this time, I was tired. I wanted to go to sleep. I could have left the second half of the dough in the fridge, but I knew I wouldn’t have time to finish making the cookie / tartlets before bowling. So, I got creative. Instead of making tartlet shells, I rolled the dough flat, put the rest of the apple filling inside – just like you would make cinnamon rolls – rolled it up, sliced it into pieces and baked them in the muffin tin. 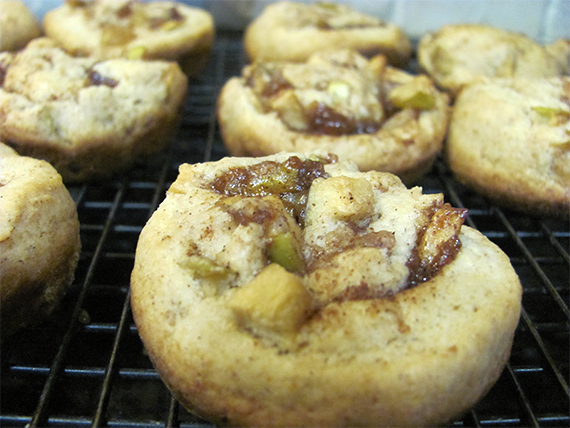 Amazing! Two very different types of cookies with the same recipe. These were drizzled with good caramel and they were delicious. 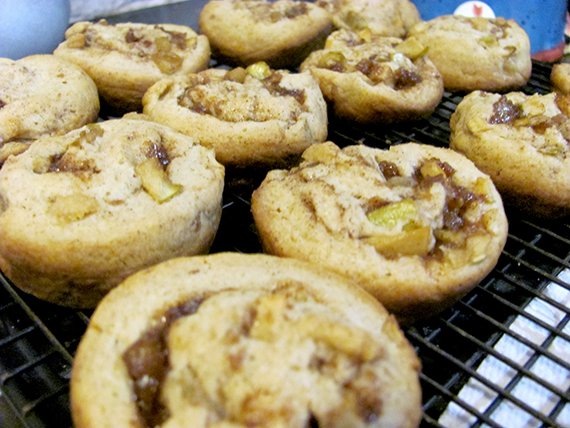 The recipe for the cookie base is light and flaky with a nice hint of cinnamon and brown sugar.  I will use it for other bases too!

APPLE PIE COOKIES
For the cookie base:
2 cups all-purpose flour
1 cup salted butter, diced and kept very cold
1/4 cup brown sugar
1/2 tsp. cinnamon
1 tsp. vanilla
1/4 cup milk
For the apple filling:
2 Granny Smith, or other firm apples, peeled, cored and chopped into small pieces
1/4 cup brown sugar
2 TBLS butter
1/2 tsp. cinnamon
1/4 tsp. all spice
1/8 tsp. cloves
1/8 tsp. nutmeg
2 TBLS water
1 TBL cornstarch
For the Caramel Sauce:
1/4 cup water
1 cup sugar
4 TBLS butter
1 cup heavy whipping cream
1 tsp. vanilla
Heat the oven to 350.
Begin by preparing the apple pie filling.  In a medium skillet over medium heat, combine apples, sugar, butter and spices.
Once the butter melts and the apples begin to soften, combine the water and cornstarch and add to the apple mixture. Stir until the mixture thickens. Allow to cool while you prepare the cookie base.
In the bowl of a food processor, combine the flour, butter, sugar, cinnamon, vanilla nd milk. Pulse until the mixture forms a ball. On a lightly floured surface, roll the dough into a log and divide into 32 even pieces. Roll each piece into a ball. Place a ball of dough in the cup of a mini-muffin pan. Using a dough tamper or your fingers, press down until the dough reaches the top of the cup.
Fill the cups with a rounded teaspoon of the apple filling. Bake for 20-25 minutes or until the crust is golden brown.
While the cookies cool, prepare the caramel.
In a medium pot with tall sides, add the sugar in an even layer. Pour in the water and gently stir to combine. Using a pastrty brush and some water, wash the sides of the pot to make sure no sugar crystals cling to the sides.
Cook the sugar over medium heat, swirling the pot occasionally, but do not stir, until it is a dark amber color. Add the butter and whisk to combine. Turn off the heat and add the cream slowly, whisking constantly until the caramel is well combined.
Add the vanilla and stir.
Heat the mixture over medium heat and bring to a boil. Once boiling cook for one minute. Cool for thirty minutes.
Once the caramel is cool, pour about 1/2 tsp over the top of each cookie. Allow the caramel to set for two hours before serving. Makes 32 cookies
APPLE PIE CINNAMON ROLLS
Follow the above directions for making the apple filling, cookie crust and caramel.
Cut the dough in half.  Refriderate one half as you work with the other. Roll the dough into a large rectangle. Spread the apple mixture evenly over the dough. Starting on the short side, gently roll the dough into a log, keeping the apple mixture inside. Put the rolled dough in the freezer as you prepare the second half of the dough. It should only be in the freezer for about 20 minutes. You just want the dough to chill so it holds together better when you slice it.
Take the rolled dough from the freezer and slice it into 12 rounds. Place each round, cut side up, in a regular muffin tin.
Bake at 350 for 15-20 minutes. Remove from tin and allow to cool.
Drizzle caramel over the top and enjoy!  Makes 24 rolls.