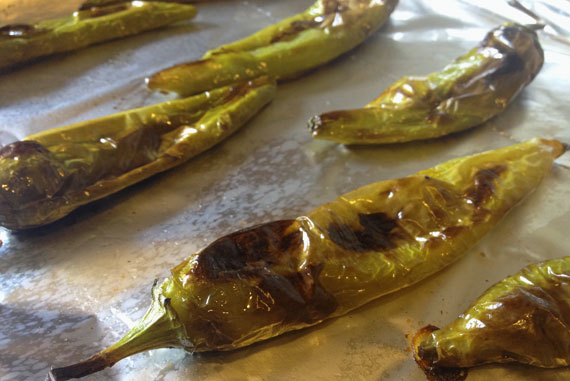 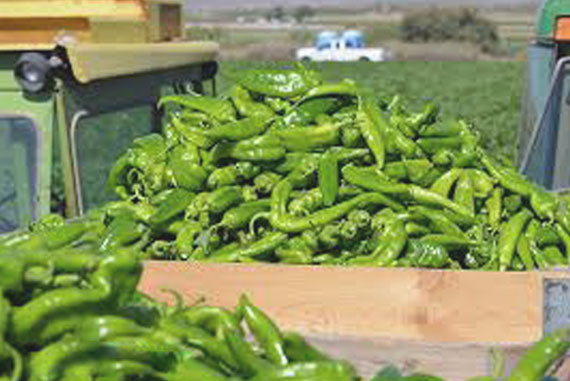 Hatch Chiles are only grown in the Mesilla Valley of New Mexico. The harvest time is very short. They are available for just a few weeks in August and September. Here in Southern California and elsewhere across the country, attending a large roasting event, is not to be missed! The smell of freshly roasted peppers spreads through the air and you find yourself with visions of tasty chile recipes dancing in your head! Unfortunately, I wasn’t able to go to a roasting this year, but thankfully, I can roast Hatch Chiles at home and get the same great flavor and smells in my own kitchen! 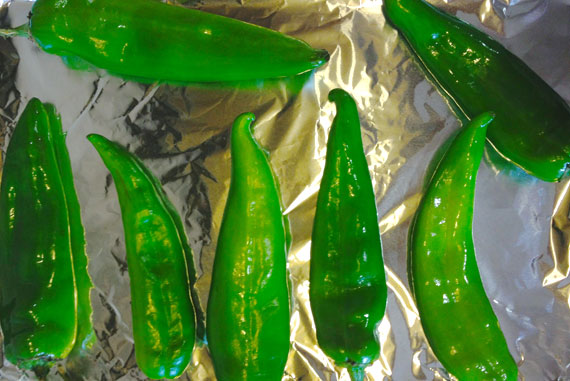 Start with fresh Hatch Chiles. Look for ones that are firm, bright green and glossy! I picked these up at Whole Foods, but they are available in other stores or you can order them online! (Melissa’s Produce is a great supplier for Hatch Chiles and plenty of other delicious produce!)

Hatch chiles can range from mild to very hot. (250 – 30,000 on the Scoville scale!) That’s a huge scale difference, so be sure to check and ask for the heat level you enjoy most! Me, I’m a mild girl, but my husband likes them hot! (Yeah, he does! Wink! Wink!)

To roast Hatch chiles at home, there are four different methods. Roasting chiles will add a smokey flavor and bring out a beautiful sweetness to balance the heat. Remember always wear gloves when handling chiles. We don’t want anything other than the chiles to be hot and spicy! You can roast your chiles in the oven, under the broiler, char them on the grill or over an open flame. It really depends on what you’re comfortable doing. Personally, I like to char them under the broiler or on the grill.

To roast your chiles under the broiler, set it to High, then roast the oiled chiles until they are darkly blistered. On the grill, heat either charcoal or gas to a medium-high temperature. You will need to turn the chiles several times to get an even char. This takes just a few minutes in the broiler and only about 10 minutes on the grill.

To roast your peppers in the oven, set the oven temperature to 425 degrees F. Rub the peppers with cooking oil. Roast the peppers for 15 to 25 minutes, turning often to char both sides.

To char the peppers over an open flame, use long, heat-proof tongs and hold the pepper over a gas burner set to medium-high. Char 5 to 10 minutes or until all the sides are darkly blistered. Remember, you don’t need to oil the peppers with this method!

Once you’ve achieved that delicious dark char, from any of the above methods, place the peppers in a plastic bag or heat-proof bowl. Seal the bag or cover the dish tightly with plastic wrap. Set it aside until the peppers are cool enough to handle. 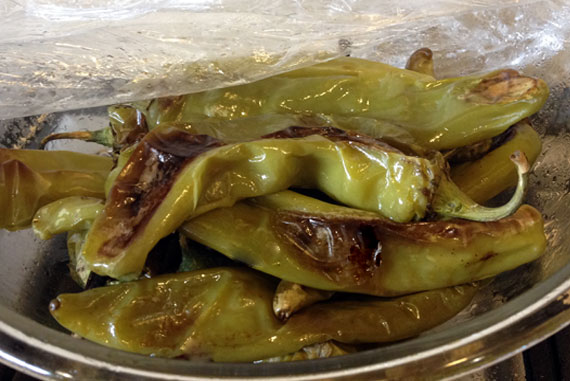 Using gloves (as always when handling peppers!) gently peel away the charred skin before removing the stems and seeds.

Now you’re ready to add them to your favorite chile dishes! Since Hatch Chiles are available for such a short time, stock up and freeze them in batch size containers! Be warned though, Hatch Chiles get hotter over time, even when they are frozen.

Now that you know how to roast chiles at home, what will you make with yours? Me? I’ll be making Hatch Chili Corn Bread and Chicken Chile Empanadas! Look for those recipes coming soon!