Homemade Granola is simple to make, tastes amazing and you have SO many more options to customize it, versus those stuffy store bought versions. Build it your way! Make small batches, big batches, middle of the road size batches. Make it for your family or to give away as gifts.The world is your granola recipe! Plus, you can eat granola with Homemade Instant Pot Greek Yogurt for breakfast, by itself as a snack, baked into bars or as a muffin topper, even sprinkled over ice-cream. It might be the perfect food. I’m just saying. 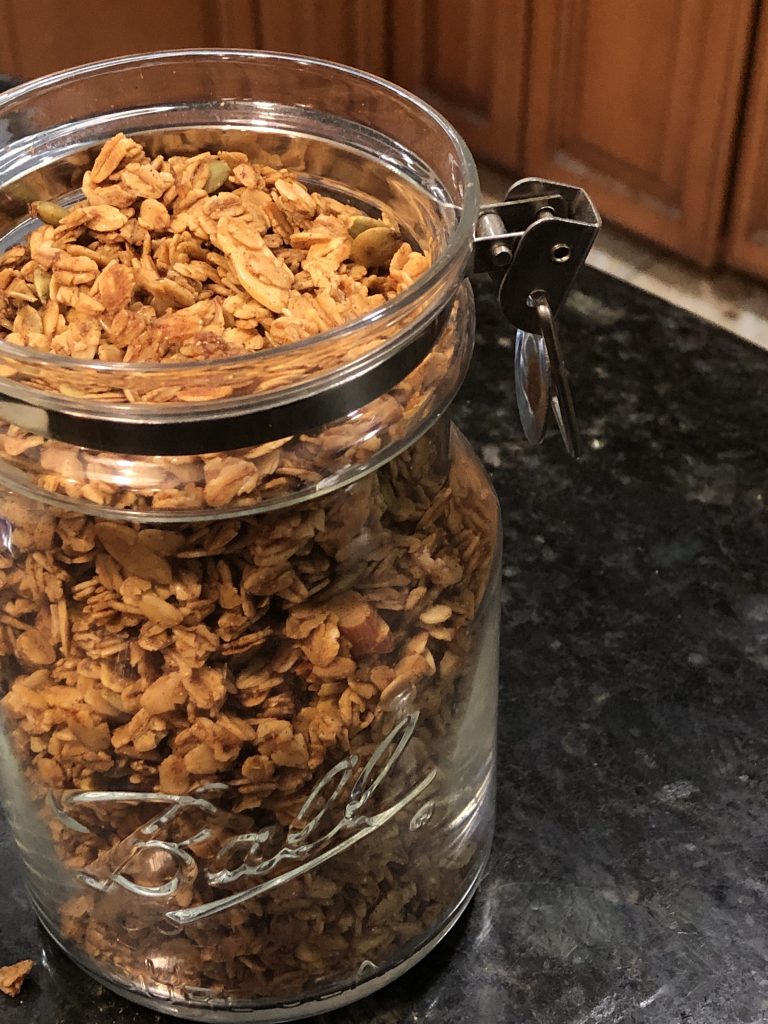 The basic recipe for this homemade granola is from a book called “The Homemade Pantry: 101 Foods You Can Stop Buying and Start Making!” by Alana Chernila. (Buy it here on Amazon). This was way back in 2013 and since then I have tweaked the original to my tastes. To be honest, I probably haven’t made the same version twice. Alana invited me to change it (in her book, I don’t actually know her) and I encourage you to do the same. Use it as a guide and just have fun. Be warned however, once you start making it on your own, you may never go back to regular cereals again.

Recently I was introduced to a new brand of Agave Syrup called Soviia Agave. They have several different flavors, from maple, to pumpkin spice, vanilla, coconut and even chocolate. To make this specific version of granola, I used their Coconut Agave. I wanted to bring out the tropical flavor just a bit because it’s Summer. In the Fall, I’m looking forward to using their Pumpkin Spice Agave or Maple Agave and adding dried apples to the mix! See what I mean about customizing your granola? Go crazy friends!

Can I tell you a bit about Soviia and why I like it? First, it’s local company and it’s important to support the people around you. Second, their syrups are Non-GMO, Vegan and it’s significantly lower on the Glycemic Index than any other sweetener.  PLUS, they give back! Proceeds from sales of Soviia go helping children around the world. Eat well. Live better (and healthier) and help others all at the same time. It’s a win-win.

Homemade granola is simple to make and very versatile! I’m a big fan of nuts in my granola. Sometimes, the more the better! If you like your granola more on the plain side, by all means lessen the amount of nuts or leave them out entirely.

Preheat the oven to 250 degrees F.

In your largest bowl, combine the oats, flax, sunflower seeds, mixed nuts, coconut flakes and ground cinnamon. Stir (or toss with your hands) until well combined.

Pour the syrup over the dry ingredients and stir until everything is coated. Be sure to stir well so there are no hidden pockets of syrup or dry ingredients in your bowl.

Line two baking sheets with parchment paper and spread the granola in an even layer. Try to get half of the granola on each pan.

Put the pans in the oven, making sure both racks are in the upper two-thirds of your oven.

Bake for 30 minutes, then stir the granola and switch the trays on the racks, rotating them from front to back as well.

Bake another 30 minutes, then stir, switch and rotate the trays.

Bake for a final 30 minutes longer.

At this point simply turn OFF the oven (leave the granola inside) and let it sit for up to six hours. It will harden and crisp up as your oven cools.

If you like raisins, dried berries, or any dried fruits, (even chocolate chips) in your granola, add them in after you take the granola from the oven.

Granola will store well on the counter for 3 weeks (if it lasts that long) or in the freezer for up to 6 months. 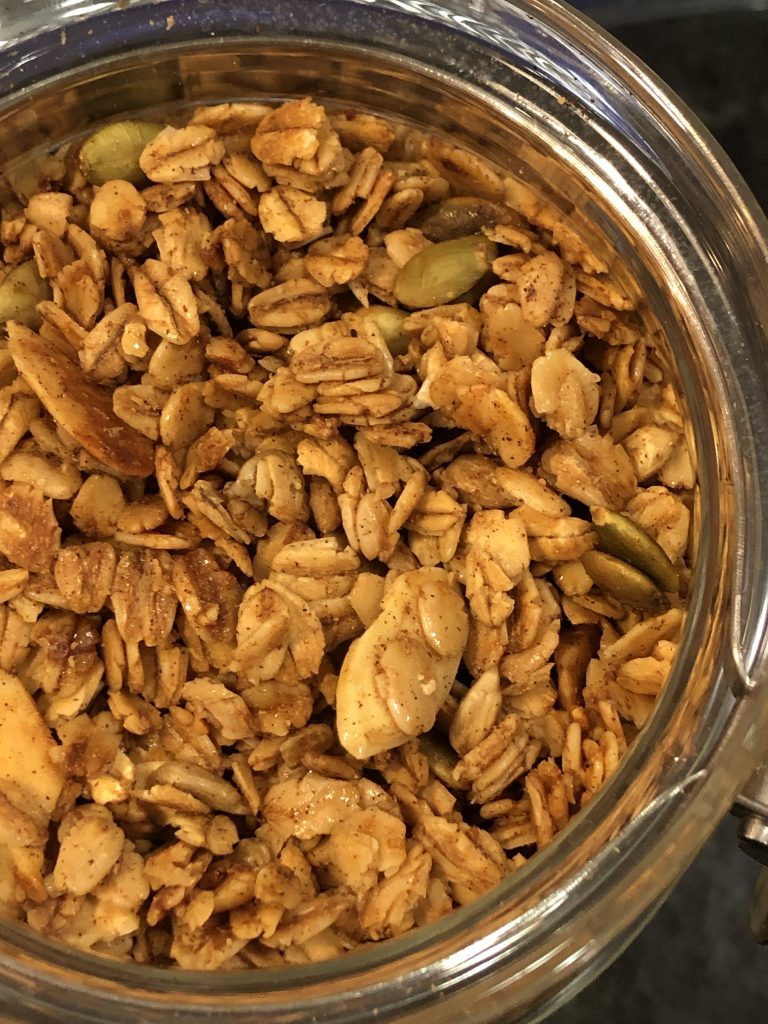 The original version of this recipe, can be found here: Eating From The Ground Up   It makes a LOT,  so feel free to cut the original in half or quarters, depending on your granola needs. I can’t wait to hear how you customized your own version!

So honored to have been a part of this new cookboo

Good morning from the first squash blossom in the