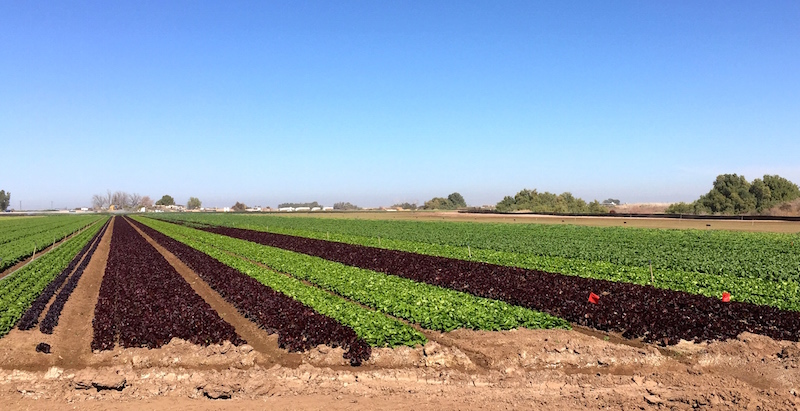 Last weekend I had the pleasure of being part of the California Farm Water Coalition Imperial Valley and Coachella Valley Farm Tour. The tour was a way to educate and  create awareness of some the water issues California farmers are currently facing.  Three fabulous fellow bloggers and I set out from San Diego for a two day tour of some farms in these areas! If you live in Southern California, the first thing you might think of when someone says “Coachella” is that big music and arts festival that happens there every year. What you may not know is these areas currently provide a good portion of the winter fruits and vegetables you see in your grocery stores right now!

The farms here grow crops year-round. They have almost perfect growing conditions for ten months out of the year. Almost all the crops they grow are seasonal. Alfalfa, asparagus, broccoli, cabbage, carrots, citrus, lettuce, onions, romaine, and summer squash are harvested from January through March. During our visits, we saw many of these products growing in the fields!

Between July and September is the time for alfalfa, banana squash, okra, more onions and beets, tomatoes, watermelon, and wheat!

Pretty cool, right? You’ll notice many of these crops are repeated through the entire year! Yep, like I said, perfect growing conditions nearly all year long. 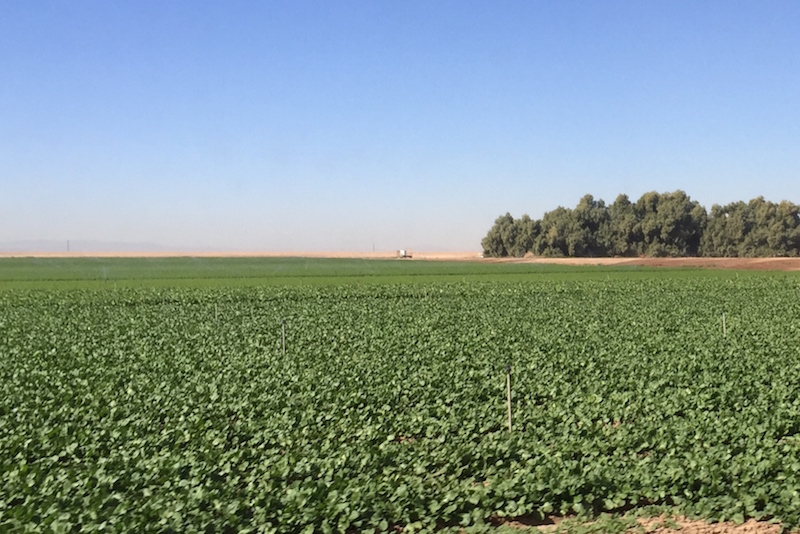 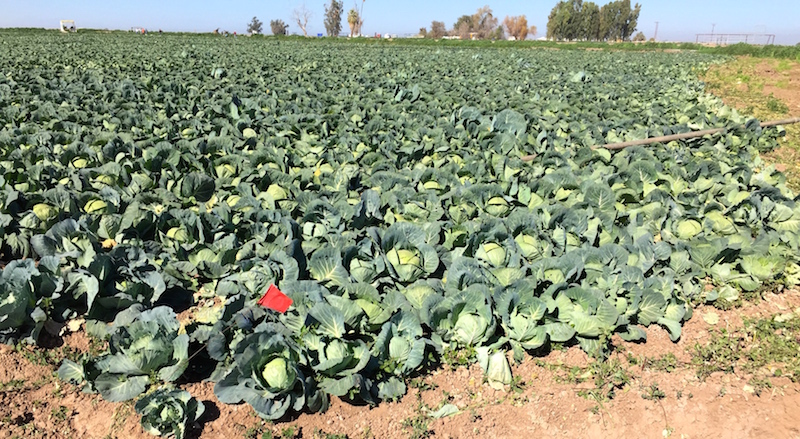 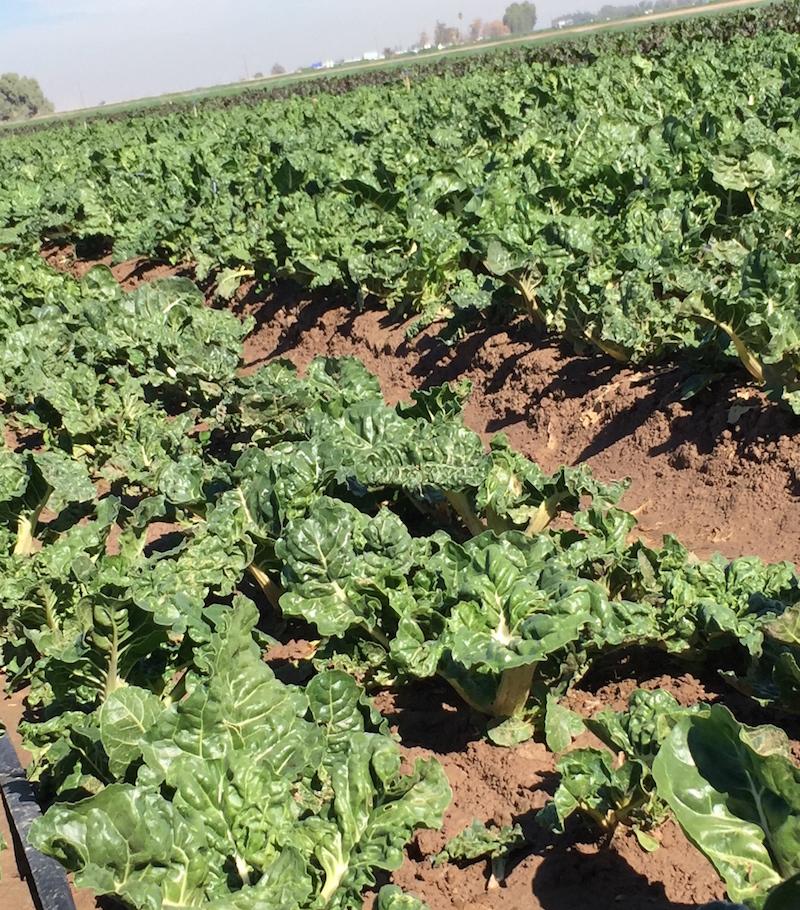 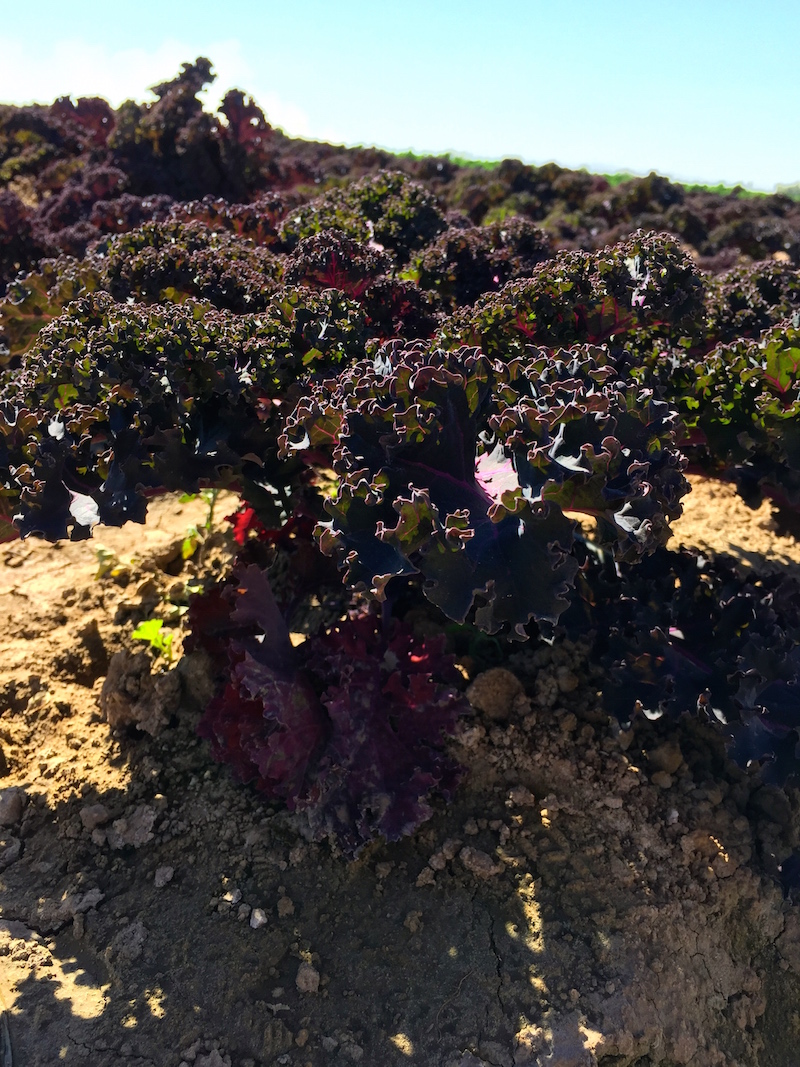 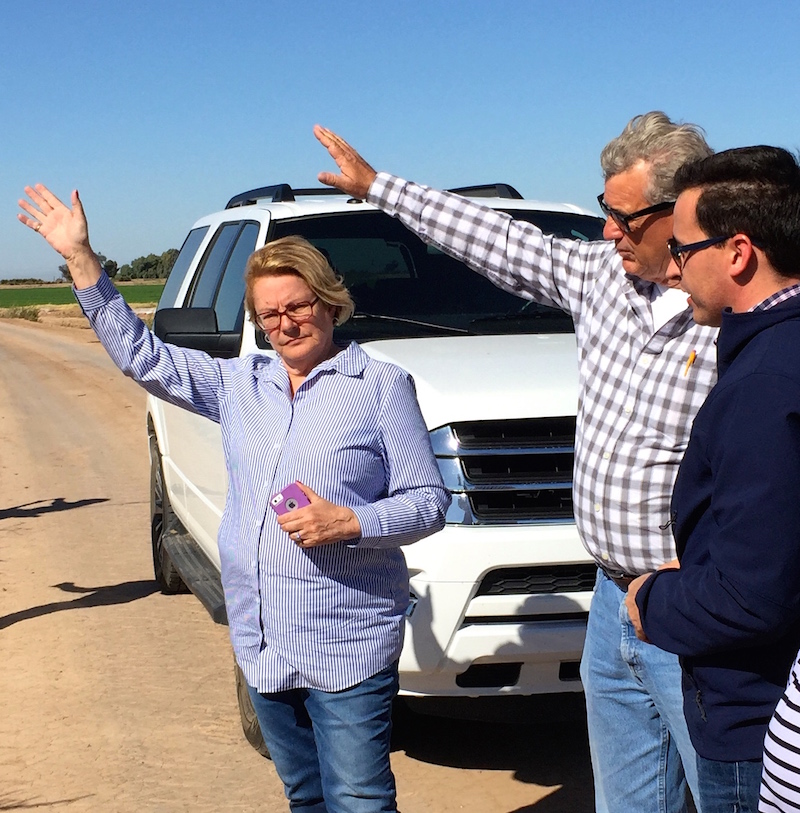 Both Kay and Scott shared a wealth of information about crops and the vital importance water plays in keeping this area growing. We spent a lot of time talking about acres of produce and how many “acre feet” of water it takes to grow all these different crops.  An “acre-foot” of water is equal to 325,851 gallons, or enough water to cover an acre of land (about the size of a football field) one foot deep.  That may sound like a lot of water, but it’s really not that much when it comes to growing things!  California Farmers produce over 400 different crops.  At Lakeside Organic Gardens, Scott grows 47 different crops and when he needs to water them, he actually has to order the water 36 hours in advance.  You see, he’s only allocated so much for his land and he has to be very careful how he manages it. 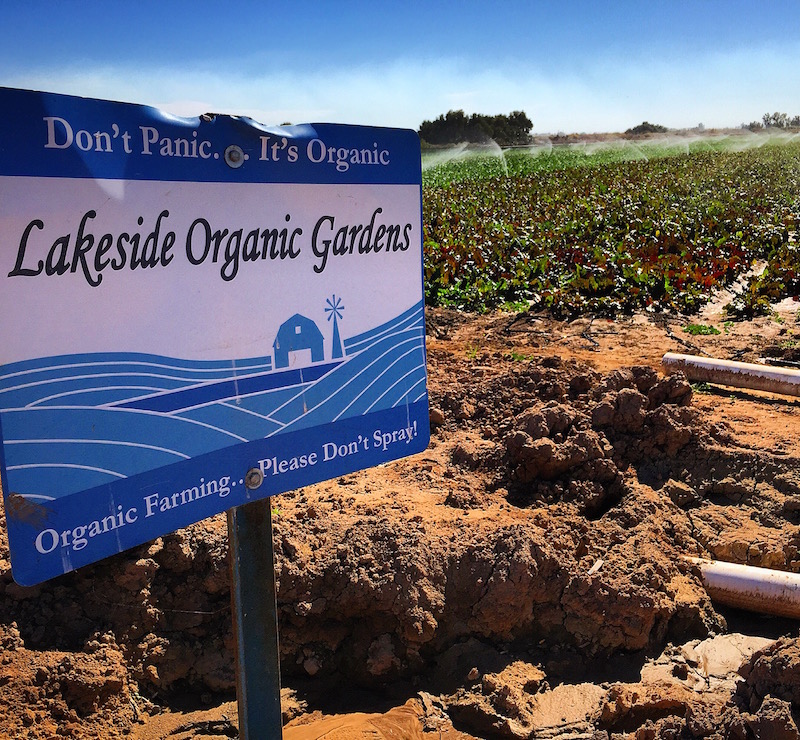 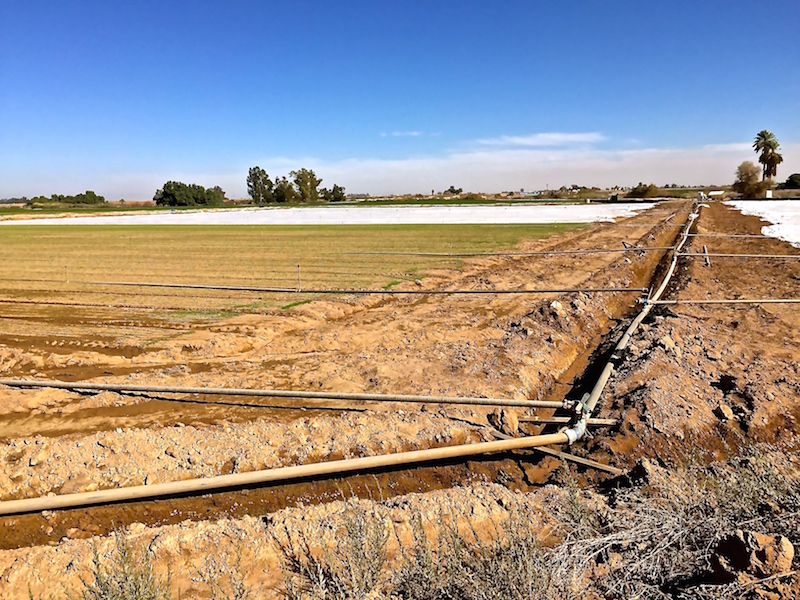 Irrigation is a such a critical part of farming today, deciding on the best irrigation method for each farm and each different crop requires careful planning. There are three main types of irrigation systems used on the farms we saw.  There is flood irrigation, sprinkler irrigation and drip irrigation.  Each has it’s merits and pitfalls.  Knowing which type to use in order to best conserve water (hugely important in California!) and continue to provide what is best for the crops is a delicate balance. 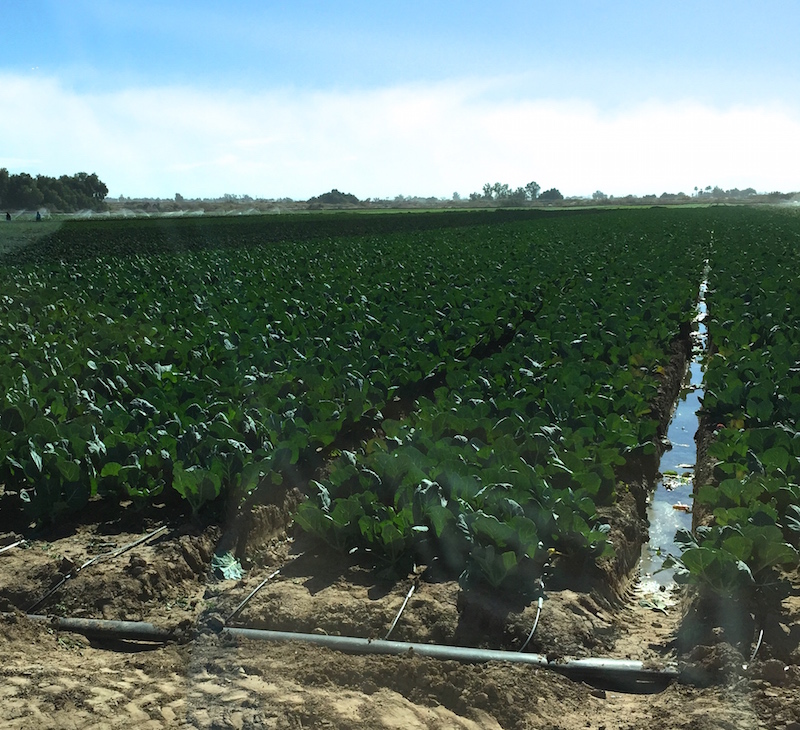 So much more goes into this whole operation than I ever realized!  Looking at the produce in my grocery store after the tour, I have a whole new level of understanding and appreciation for what it takes to grow my favorite fruits and vegetables and how seriously important water is to California Farmers!  Food is an expensive business.  All the decisions and different sets of regulations, quality control, testing and hard work are just a fraction of the process. It’s mind-boggling, really. 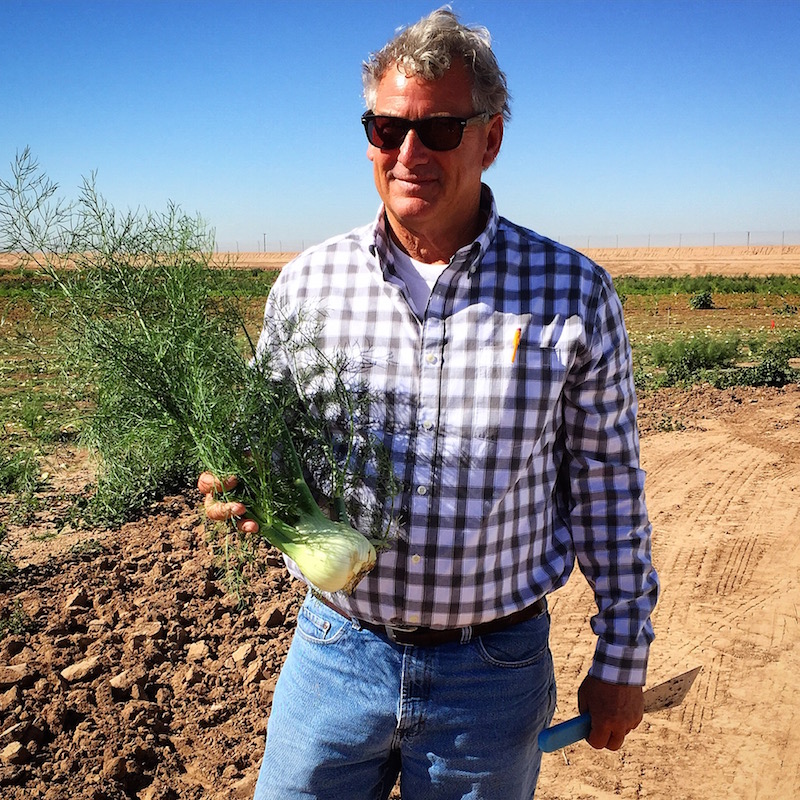 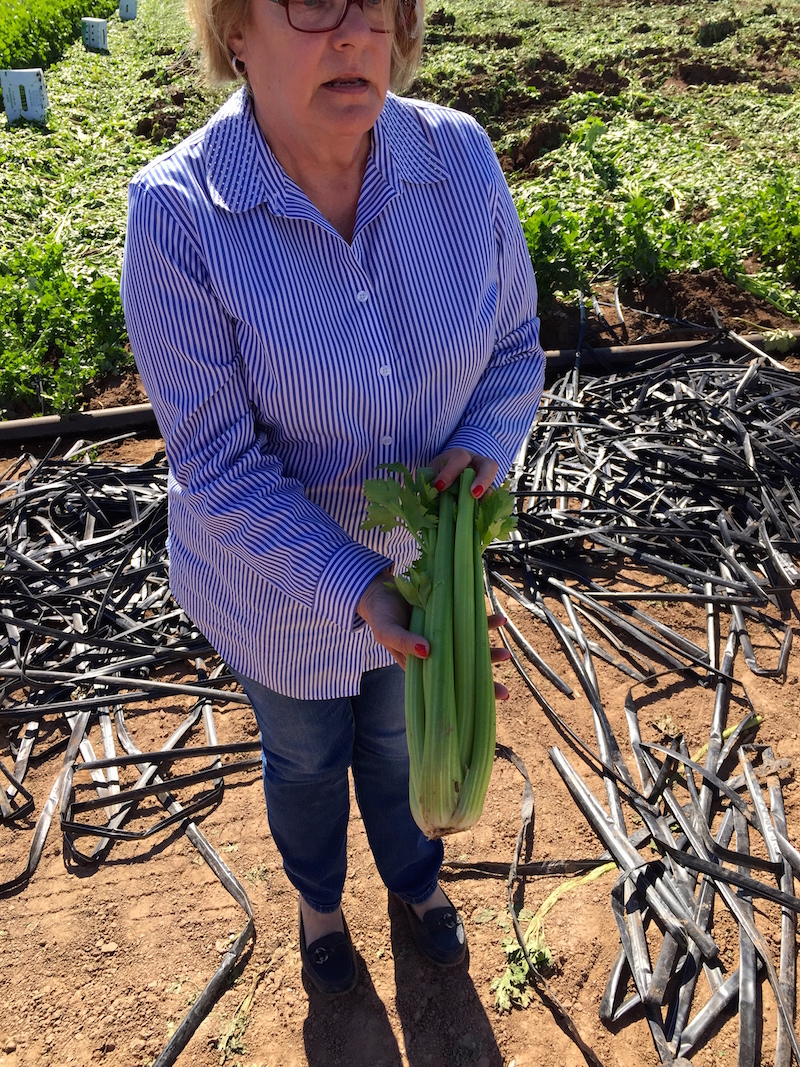 Do you see all the small poly tubing at Kay’s feet?  That’s the drip irrigation used to apply water to a small area directly to the root zone of a crop. In this case, celery!  It’s a fascinating process! Remember when I mentioned that California Farmers produce over 400 different crops? California is the source for about half of the nation’s fresh fruits, nuts and vegetables.  For a lot of those crops, California produces more than any other state!  In fact, 94% of the celery grown in the USA, is grown right here in California.  It’s quite a responsibility to be such a significant source of the nation’s food supply.  Which is why a reliable water supply is so critically important to California Farmers.  They’re feeding a nation of people and without a good supply of water for their crops, the whole country will suffer.

After visiting the first farm, we stopped at the Holtville Rib Cook-Off, an annual fundraiser for the Holtville Athletic Club, which hosts and helps a great deal of different projects in the city every year. 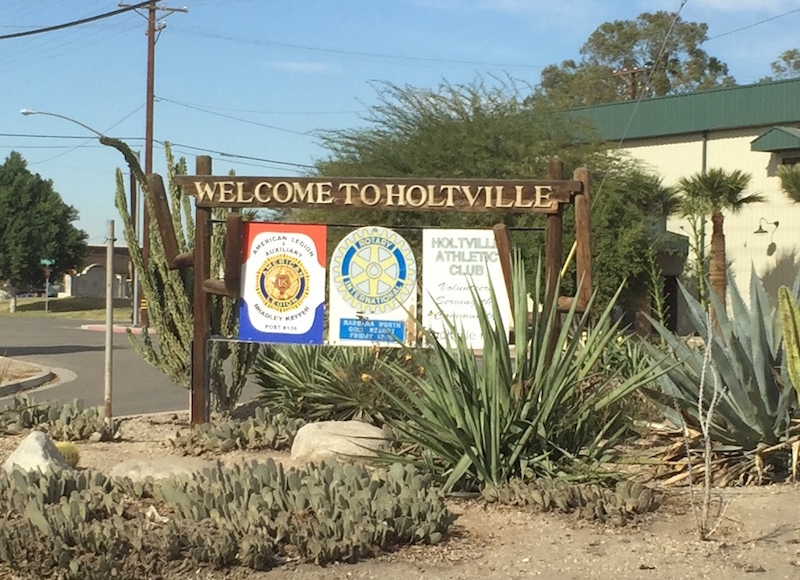 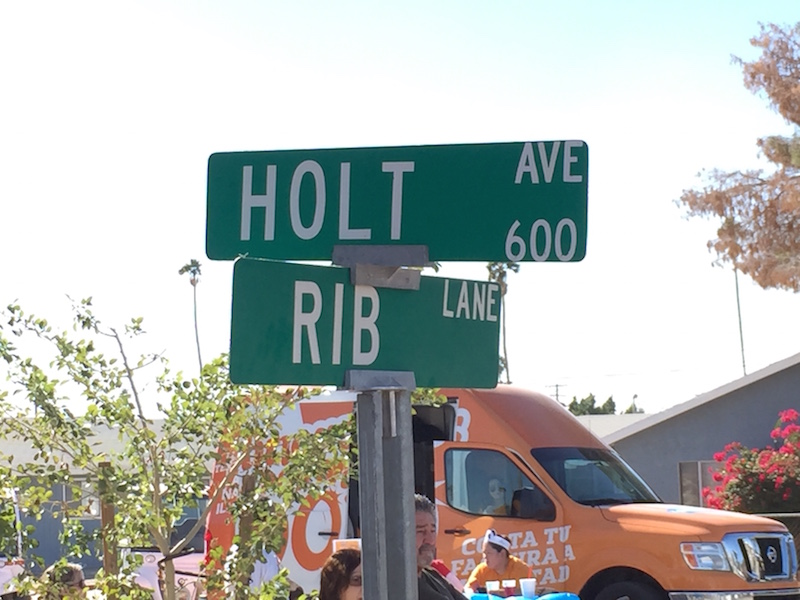 We heard that the entire town (and more) were at the Cook-Off!  I believe it!  It was such a fun festival!  Lots of families, good food and great music!  After the Rib cook-off and a lovely lunch with our hosts Kay and Scott, we were off to tour a place called “Veg Cool.” 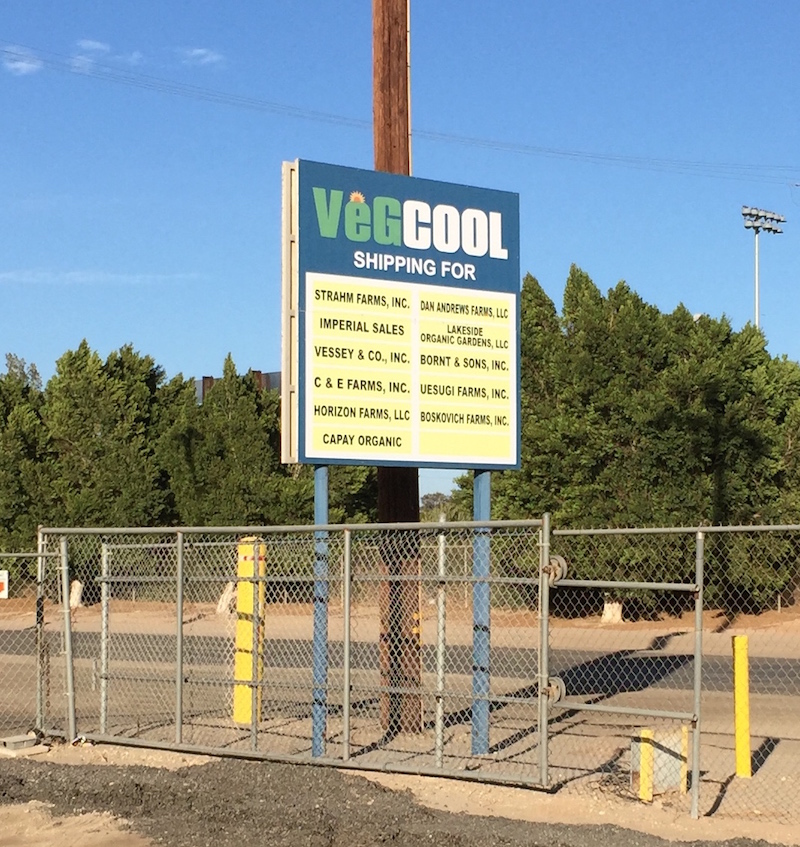 Veg Cool is the first place vegetables go after being picked in the field. Vegetables come here to be cooled down before heading to their next destination.  It’s a short stop, but an important one!  Just like you wouldn’t put hot soup in your refrigerator, vegetables must have the heat pulled from them before they can go in to a cold room or be packed in ice for shipping.

All vegetables go on a hydro-cooler to be pre-cooled.  That’s what this big unit does.  They load the boxes on to the cooler and shut the curtains to let all the ice in the bottom do it’s work and cool off the field fresh vegetables. 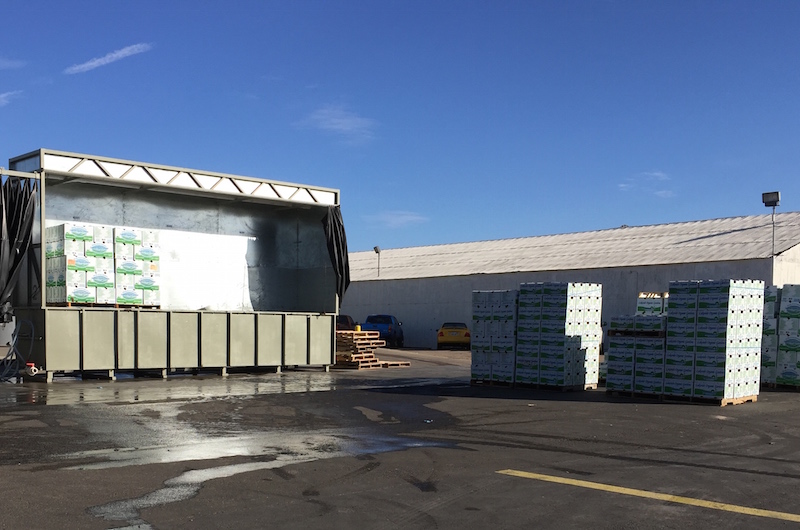 After that, depending on the vegetable, they are either hand-iced or put in a machine called an ice-injector to be cooled enough for transport.  Most leafy greens must be hand iced because they’re so delicate.  Heartier vegetables like broccoli and radishes, get cooled with the ice-injector. 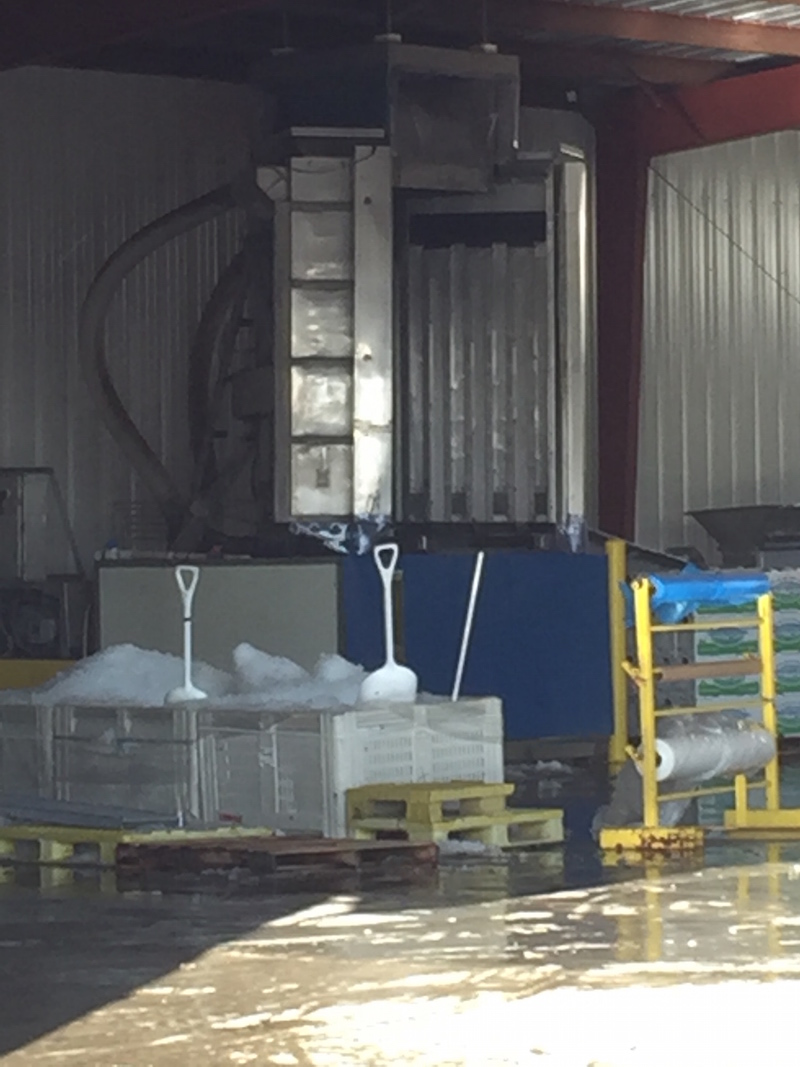 The ice process is all organic and their ice is regulated and tested for safety!  Veg Cool goes through 150 tons of ice a day!  That’s a lot of ice, y’all, and they make it all on-site.  Pretty cool, huh? (No pun intended!) After the vegetables have had the heat pulled from them and they’re cooled down, they get put in the Ice Room until they’re shipped out to a grocery distribution center and on to your grocery store shelves. 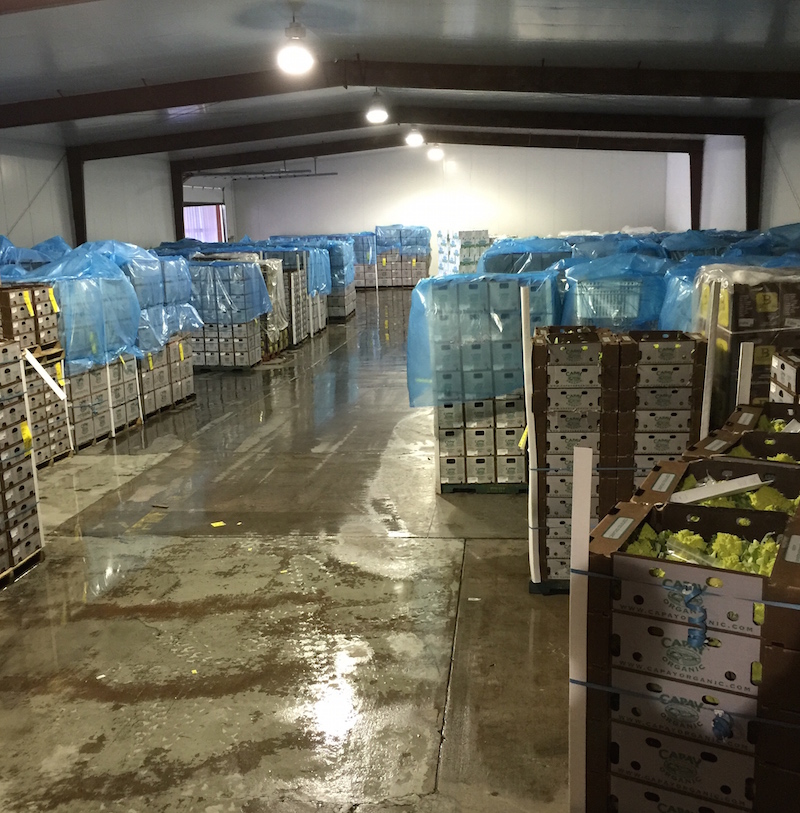 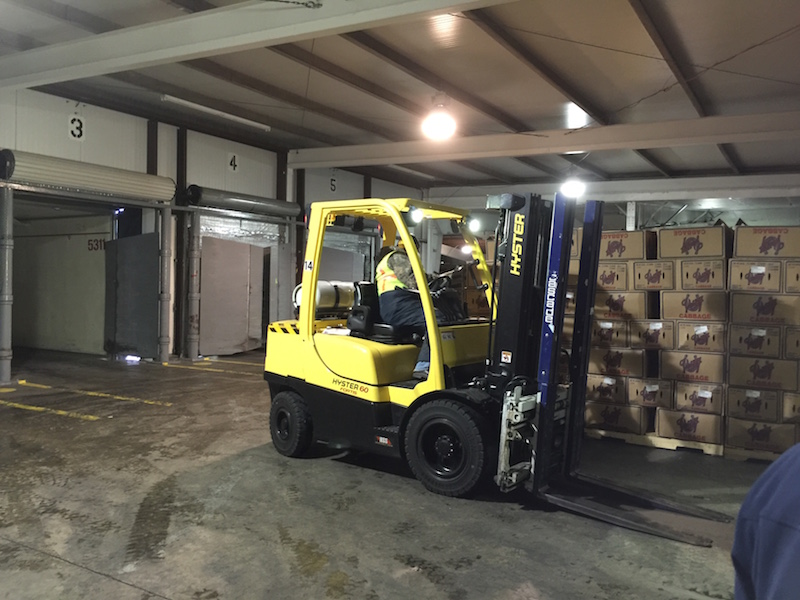 It may seem like a long process, but the vegetables stay here less than a few hours! I like knowing my vegetables are getting to my store and my table in as little time as possible.  Fresh is best!

After Veg Cool, we headed up into the Coachella Valley and made a sunset stop at the Salton Sea. 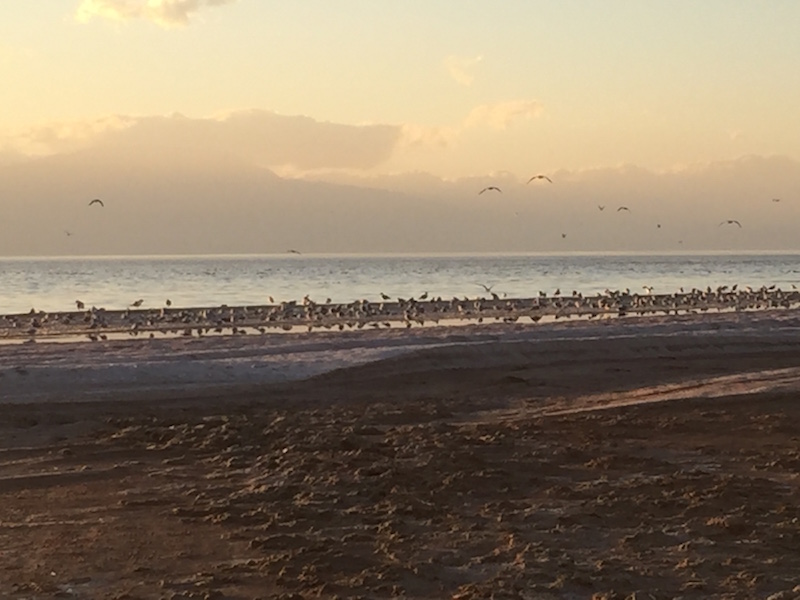 The history of the Salton Sea is intriguing.  Currently home to over 400 different species of birds and an important stop for migratory birds along the Pacific Flyway,  the Salton Sea was formed when irrigation canals from the Colorado River jumped their levees near the U.S./Mexico border in 1905.  Millions of gallons of fresh water spilled into the Salton Trough and when the water was finally stopped, almost two years later, it had created what we now know as The Salton Sea. 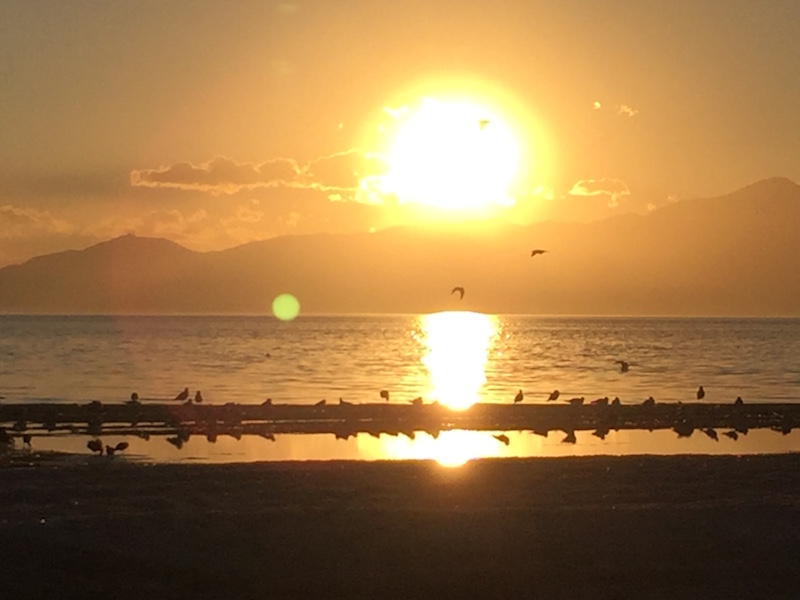 Covering nearly 376 square miles, the Salton Sea is the largest lake in California.  Once largely sustained by agricultural runoff from the Imperial Valley, the lake has been steadily shrinking, partly due to a combination of California’s drought, more efficient irrigation methods, changing crop patterns and an increased demand for residential water from people moving in to the state.

Most of the time, we turn on the faucet in the sink and don’t think twice about the water streaming out of it.  Water is essential to so many things! We need it for everything we do.  Water, not just to nourish our bodies and create the food we all need to survive, but for power, clothing, manufacturing, technology, transportation and so much more!

This was only the first day of the tour and I feel like I’ve learned so much!  I can’t wait to share the rest of it with you in my next post! Stay tuned!

UPDATE:  Here is the post of the second day of my tour with the California Farm Water Coalition!

So tell me what you think!  What are some things you do to save water at home?

*Disclaimer: The California Farm Water Coalition paid for our transportation, food, and lodging.  I was not compensated in any other way.  All opinions expressed in this post are my own.