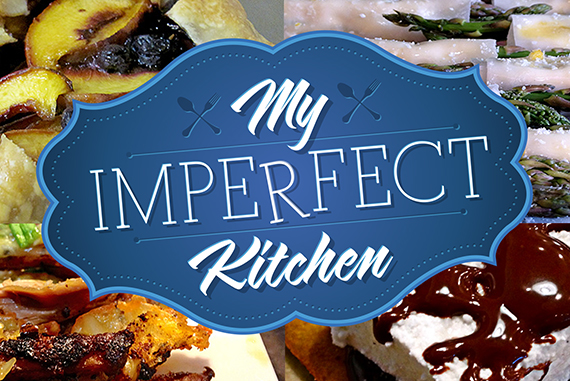 My cooking class was cancelled Tuesday night. I was seriously bummed! I was looking forward to making risotto. Oh well, next time!

The rest of this week has just flown by! I’ve been too busy to post anything, much less cook anything. This morning I am feeling very “Foodie” though and am having to restrain myself from bombarding my Facebook page with shared links of “OH! Look at this!” “Doesn’t that look delicious?” and “Who else wants to try THIS?!?” and “I’m going to make this, here is the recipe!”

Even though the week has been busy, the best part was getting Emails from my Mom about her childhood food memories. I’ve already shared with you my memories of Grandma’s cooking, so it’s been really fun getting her version.  Here is an exert from her E-mails:

“My earliest memories of food involve my Grandmother in Bryantsville. Since Dad was moving around so much in the Navy and we were following him around, we seldom got to Kentucky. But when we did, brother and I hugged our grandparents and then immediately flew through the house toward the box where Grandmom kept cold biscuits. They were absolutely delicious! Those biscuits did not need oleo or jam; they were fresh-baked every meal. Anyone who was hungry in-between meals was invited to grab a biscuit! Although my mom made biscuits occasionally, biscuits at Grandmom’s were the best — and you could always count on there being enough for grandchildren!

All the women in the family were good cooks. My aunts cooked alongside Grandmom as soon as they were old enough to safely be in the kitchen. My mom’s aunts, like Grandmom, were almost legendary for their cooking. Mom always told us she had six aunts and they were all plump except one. But Mom never failed to add — and she was a good cook, too. (That era may be the start of the slogan I have seen in many country restaurants, “Never trust a skinny cook!”) **SARA’S NOTE: See!!! THIS IS WHERE I GOT IT FROM!! :-)**

Grandmother BK cooked for a large family; she had eight children. The boys, with my Granddad, worked in the tobacco fields, augmented during off-season by working in construction or any other jobs they could find. They worked hard — and ate well.  Grandmom saw to it!

My other grandmother lived in the “city”, not a big one, but much larger than the community of Bryantsville. Grandmother BD was a good cook — but I remember most how she would always see that we had plenty of sliced cantaloupe and, when the grandkids were all together, enough canned olives to make sure no one went hungry! When olives eventually came pitted, the grandkids competed to see who could eat the most or hold the most on their fingers!

I remember Sunday dinners with Grandmother BD, Granddad and our family after church. Dinner cooked while we attended church and was ready almost immediately after we returned home.

Sunday dinners at Grandmom BK also involved dinner cooking while we were in church. Grandmom played the piano for the community church; attendance was a must for the whole family. Afterwards, we all gathered in the big dining room — all of Mom’s siblings and as many in-laws, cousins, etc., as were in the neighborhood. After the beginning prayer of thanks, dinner was a boisterous affair with enough food to eat sumptuously at dinner (mid-day meal) and have enough to form a base for supper (evening meal) for those who were still in the house.

I remember sitting on the porch swing with my aunts, mother or grandmother, snapping beans, shelling peas and talking. I smile just thinking about the memories…

And I haven’t really even gotten to my memories of my mom’s cooking. More later, even if the dryer buzzer keeps me from doing it today!”

I love my Mom! I can’t wait to read what she shares next!!

What a difference a day makes! Three shots over 8

Meet the two newest members of the garden, Officia

Just breathe... that is today’s only requirement

I don’t know who said it first, but I heard this

Thanks Snapchat for doing my hair and makeup today

Today’s project! The seeds are in. I planted le