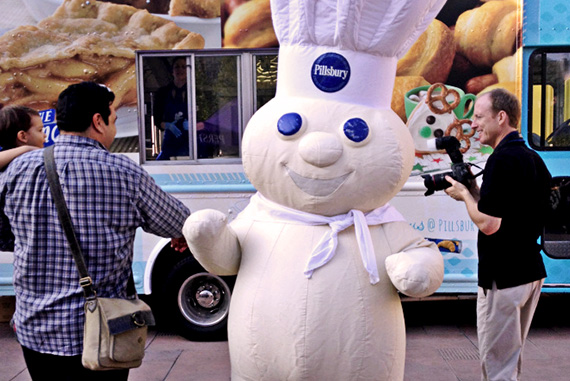 Groupon is a great thing! It’s introduced us to some fun cooking classes, great events and this past weekend – a foodie walking tour. The tour would take us through Downtown LA.

We were scheduled to meet in front of the historical Millennium Biltmore Hotel, next to Pershing Square in downtown Los Angeles. We arrived early and discovered a Holiday Celebration happening in Pershing Square. There was snow for the kids, ice skating, food trucks, merchants and THIS GUY handing out samples of cinnamon rolls! He was our first (and only) celebrity sighting of the day! 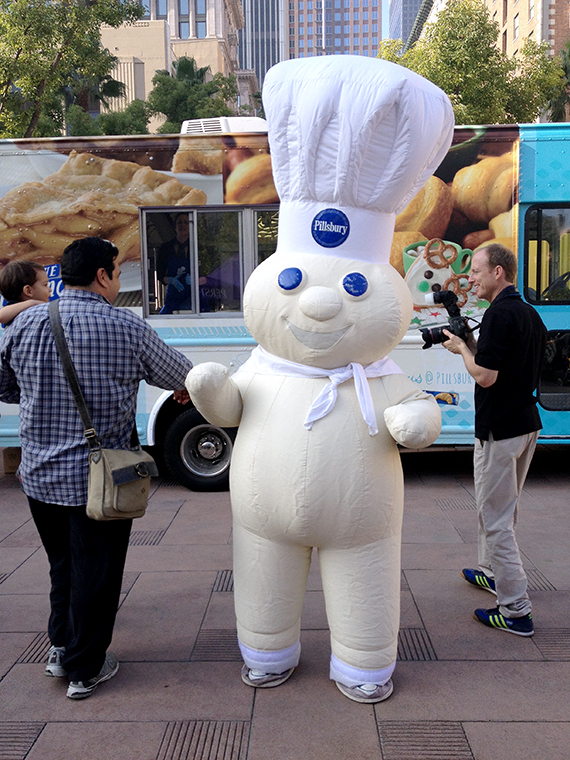 Once we met our group and the tour guide, we were off! The walking tour covered 12 blocks and took us to six different places over four delicious hours! The first place “Masis” was on the second floor of the old Warner Brothers building in the jewelry district. There is NO SIGN. Nothing outside to show an incredible restaurant upstairs. It’s one of those hidden gems. A “you have to know about it” place. If you ever find yourself in downtown on 7th ave and want some great Lebanese food, look for this sign in the ground, in front of a little black door… 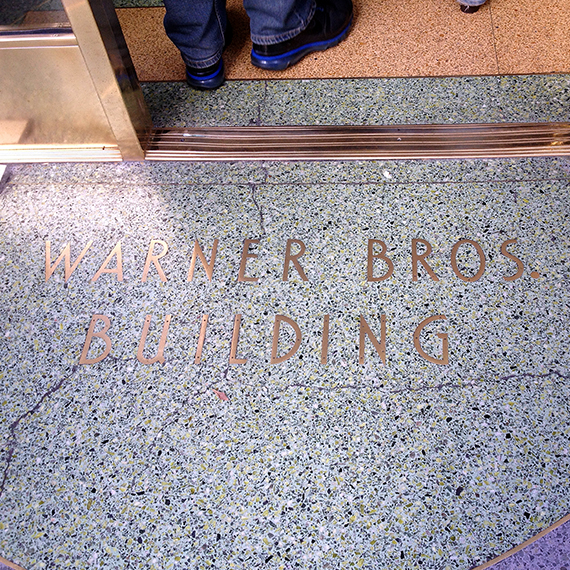 Take the staircase to the right, go to the second floor, turn left and walk all the way down the hall, past the little barber shop with the flickering black and white TV (I swear I am not making this up!) until you see this sign… 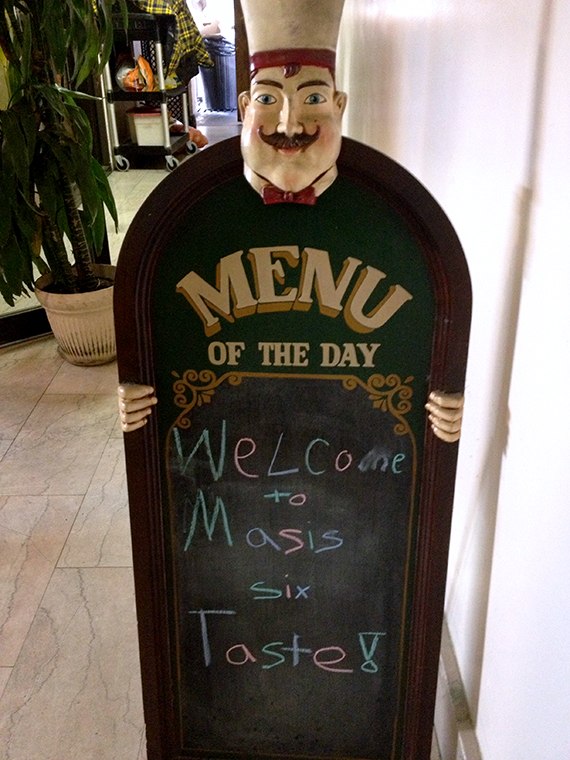 This was just the beginning of the beautiful food we were served! 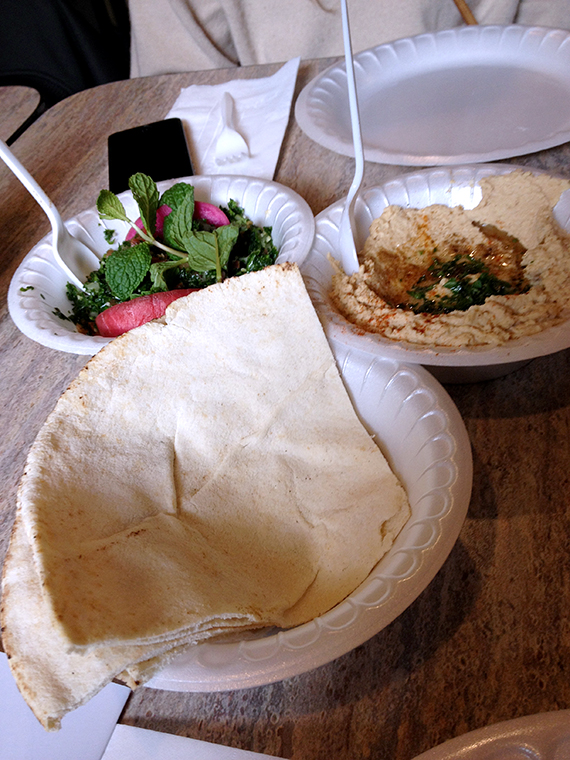 Homemade hummus and tabbouleh! We also had rice, chicken shawarma and some fabulous tzatziki! Great start to our tour!

Next was a place down the street from Masis, called Boba 7! Boba 7 specializes in Tea (as the name might imply) however, the owner likes to mix it up a bit and combines alcohol with tea to come up with some crazy good concoctions! To get to Boba 7 you have to walk through the restaurant Soi 7 and head to the back alley. 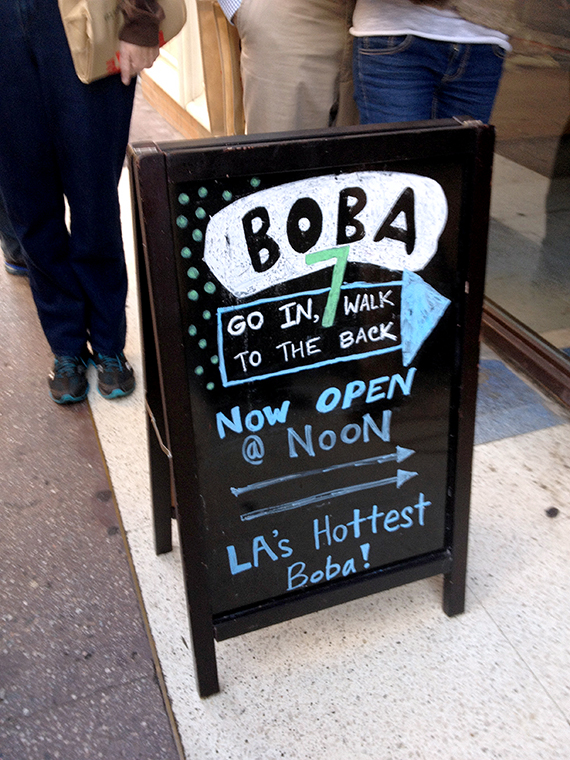 We were starting to sense a theme to our tour… Soi 7 and Boba 7 are both delightful little places! We had some GREAT Thai food here! There was deep-fried calamari, tandoori chicken and spicy chicken wings! 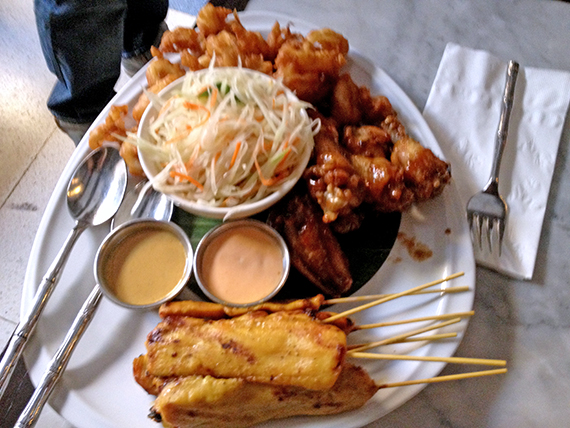 This was followed by Vegetarian Pad Thai! 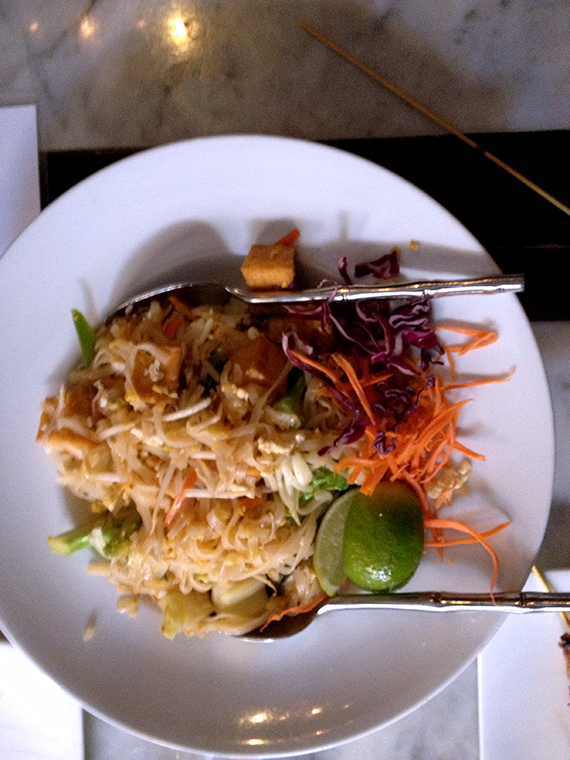 After that, it was time to WALK! Our tour guide was amazing! He shared a lot of historical information about downtown Los Angeles. We went to the Bradbury Building, walked past the old LA Stock Exchange Building, he pointed out different architectural points on the outside of some buildings left there from when trolleys took people all around the city!

Our next stop was inside the Grand Central Market – Los Angeles’s oldest and largest open air market! 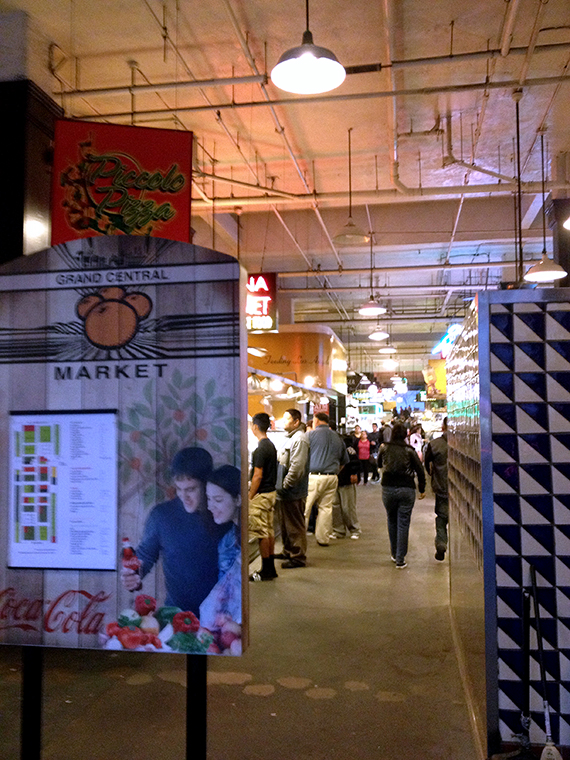 I don’t have food pictures but we stopped at Sarita’s Pupuseria! I’ve never had Pupusas before and these were quite good! Apparently they’ve been featured on Food Networks “Best Thing I Ever Ate!” I can see why!

After our Pupusas, we were off to Two Bits Market! Two Bits is a cute little place with organic meats and veggies. 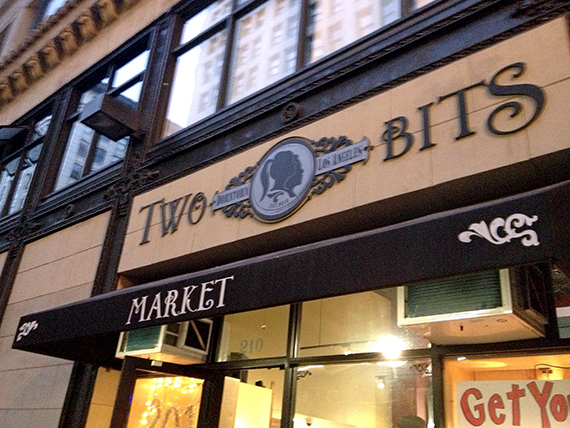 They had delicious sandwiches waiting for us! The picture is a bit fuzzy, but you get the idea! 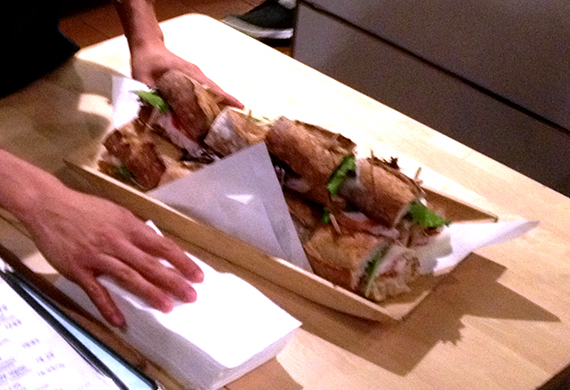 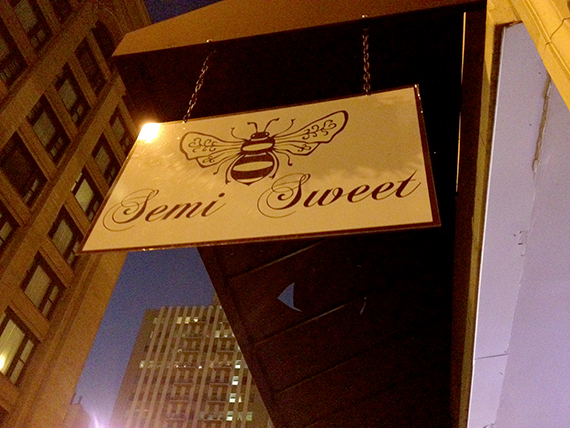 At Semi Sweet we had homemade Ding Dongs! They were made of Red Velvet with a cream center and covered in chocolate! 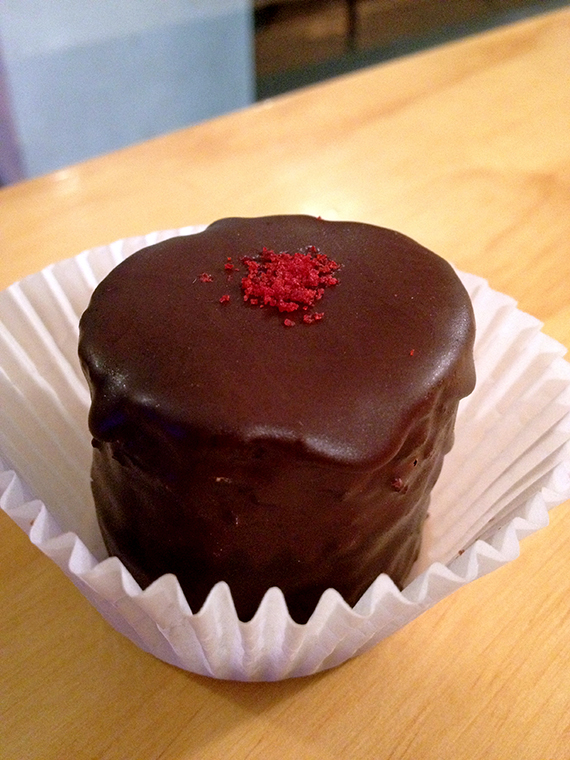 This was just a portion of the rest of their delicious treats! 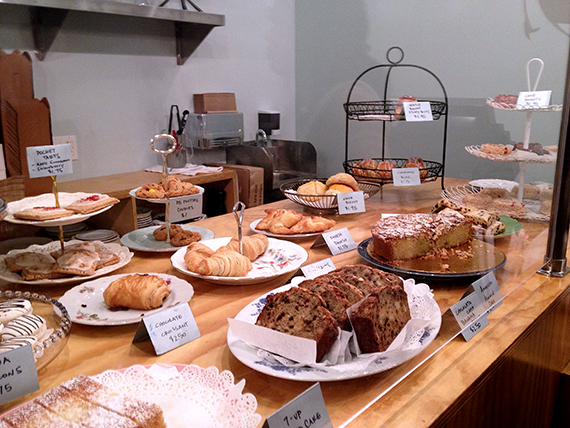 Apparently you can’t have just ONE dessert on a foodie walking tour, so after our Ding Dongs were off to our final destination,”Syrup!” 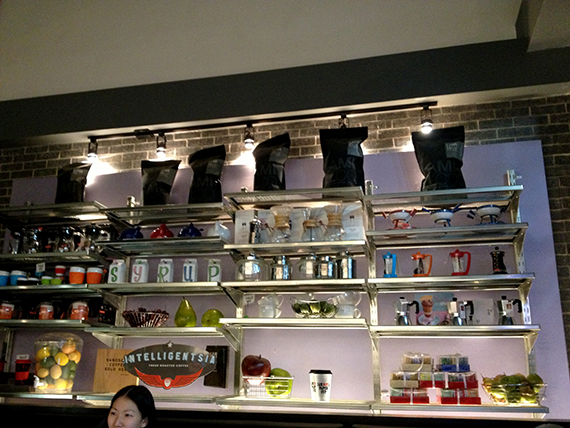 At Syrup, we didn’t just have dessert, we had THREE of them! 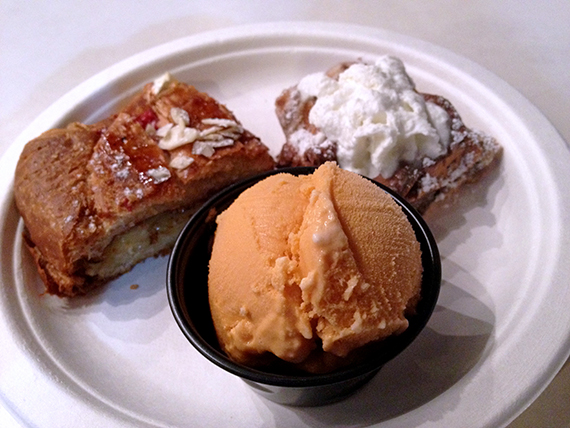 There was a Chocolate Waffle, Stuffed French Toast and a Thai Tea Sorbet! Everything was quite tasty and we were full! Thank goodness it was a walking tour! After all that food, perhaps it should have been called a waddling tour.

It was a fun way to spend an afternoon and we’re signed up to do another one in January! That one is all about dumplings and I can’t wait! I hope you enjoyed sharing this journey with me! Don’t be afraid to explore your own city. There are hidden gems everywhere! When you find something wonderful, drop me a line and tell me all about it! I need to know where to eat when I’m in your neck of the woods! :-)

“Vegan for Everyone” is a brand new innovative

Depression is a terrible thing. It hurts. It lies.

This beautiful Maple tree has been in the front ya