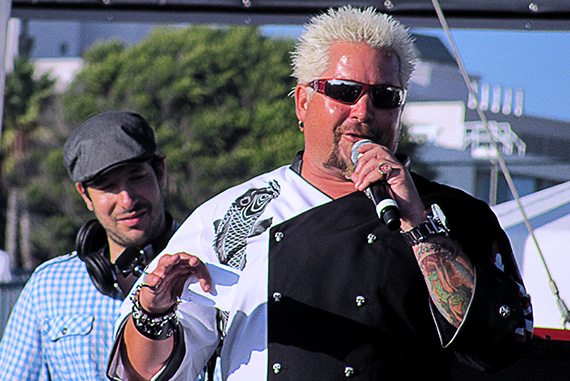 This past weekend, my friend Marie and I attended Guy Fieri’s “Brew B’Que” at Santa Monica Pier. The event was part of the First Annual LA Food and Wine Festival benefiting St. Vincent’s Meals on Wheels. With events held all over the city, LAFW appears to have been a success!  This was actually our second of event of the weekend.

Guy Fieri’s Brew B’Que featured food from celebrity chefs, beer and wine from all over the world and music from Uncle Kracker. The atmosphere was laid back, the weather was perfect, the music kept toes tapping and of course, the food, wine and beer were nothing short of spectacular! It was more than worth the price of admission!

Each Chef had a display/presentation area and were front and center feeding the thousands of people there to sample their food. Some of the Celebrity Chefs we met were: Chris Cosentino (hands-down one of the nicest people there!) of “Chef vs. City” and finalist on Season One of “Next Iron Chef.” 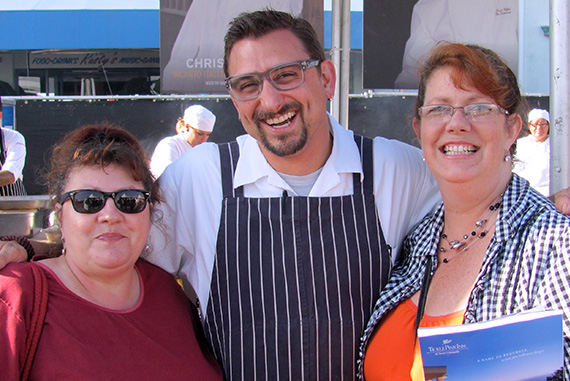 Guy Fieri of “Guy’s Big Bite”, “Diners and Drive-In’s and Dives” and more! Yep, I got to meet him!  He called me “Red!” Cross one thing off my Bucket List. Meet Guy Fieri. CHECK! :-D  I’m sure he has no idea what it meant to me to get a photo with him, but I am so lucky to have it!  The photo is a story in itself.

No, that isn’t the picture of us! 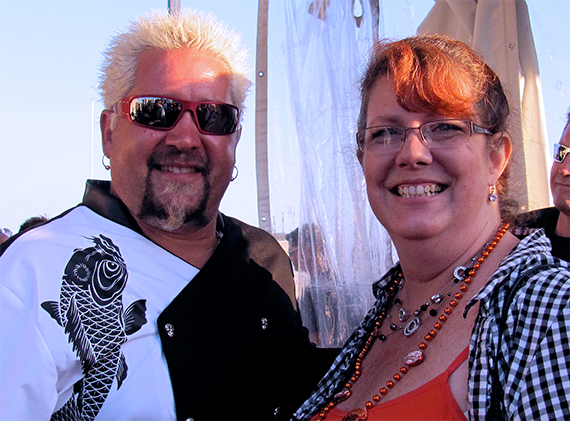 We also met Frank Ostini: Hitching Post Restaurant, Hartly Ostini Winery and the movie “Sideways.” Chef Ostini was a riot!  It was so much fun to talk to him. He is obviously very passionate about his food! 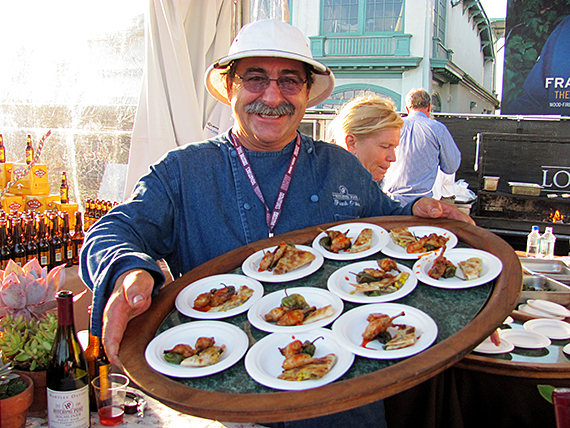 That’s just to name a few! Now check out some of the food we had: 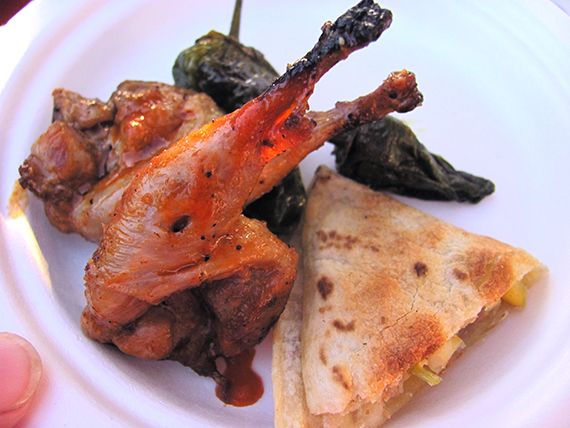 Did I mention it was amazing? 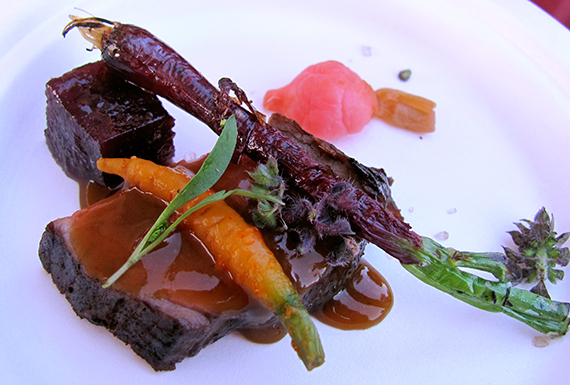 The presentation was gorgeous! 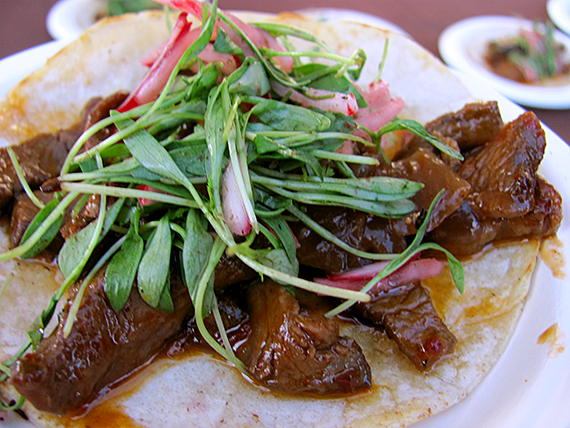 If you found something you enjoyed, you could go back over and over! 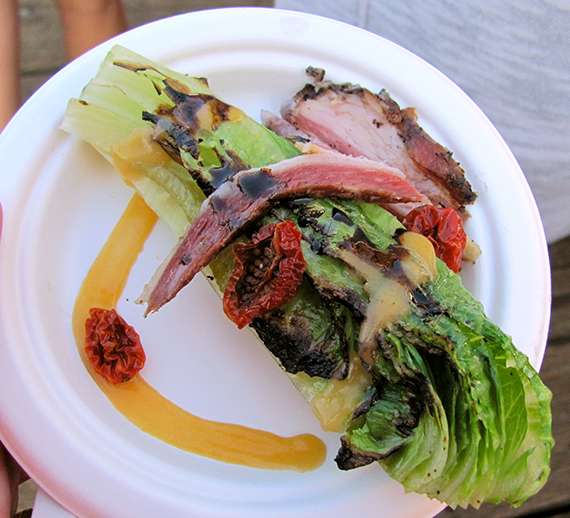 Needless to say, we were full by the end of the night! As I am writing this, I realize I didn’t take pictures of the food I enjoyed most! I couldn’t. I ate it too quickly. Don’t worry, I’m going to fire myself as soon as I’m done here. Lesson learned: pictures of everything! Write down exactly  what we ate and most importantly, who made it. Sheesh! We had some great fried chicken topped with a spicy chipotle sauce. I wish I knew who made it! The Chef would probably appreciate the shout out too.  Guy Fieri (yeah… I have a picture with him, but not a single snapshot of his food. I am SO fired.) served homemade tortilla chips with three different salsas, BBQ beef sliders with his new BBQ sauce, tri-tip served on a baguette slice and the most amazing Arroz con Pollo ever! You’re going to have to trust me on this.  It was that good!

Now, how can you have BBQ without beer? This was “Brew B’Que” after all! There were plenty  of brews to choose from too! If we had known more about the event, we’d have gotten a hotel room nearby and enjoyed more free samples. As we both had to work early the next morning, we had one.  It was Shock Top Raspberry Ale. 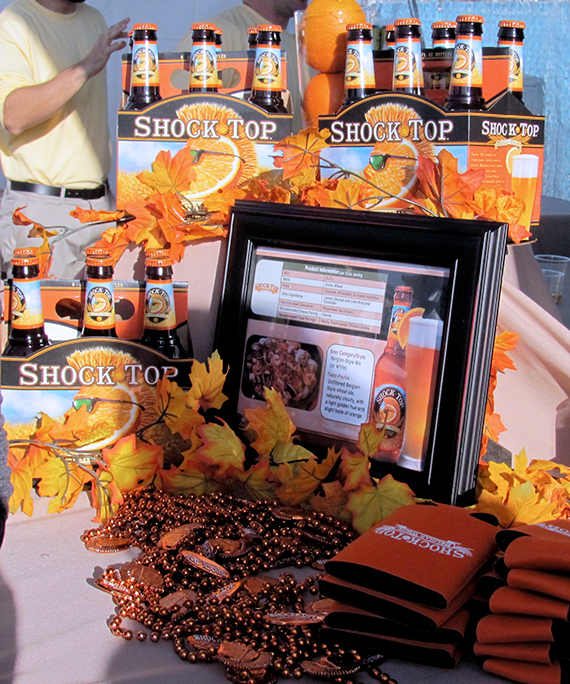 Not at all what I expected, it was smooth with a hint of raspberry flavoring. A traditional Belgian-Style Wheat ale its sweetness complimented the tart of the BBQ sauce perfectly! And they aren’t even paying me to say that!  It was really that good!

The topper for the night was getting to hear Uncle Kracker live! 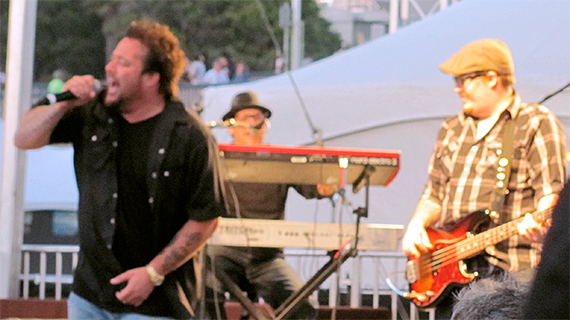 All in all, we had a fantastic time. We will definitely be doing this next year. We came away with a lot of great memories and I learned I need to get much better at taking pictures and notes of what we’re eating. It will be better next time. (Maybe) Till then, it’s back to my kitchen.